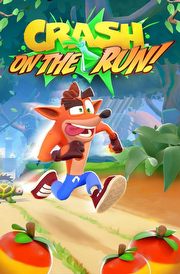 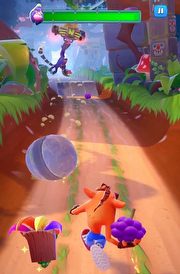 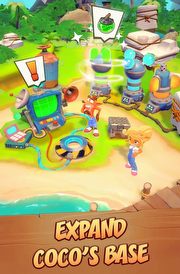 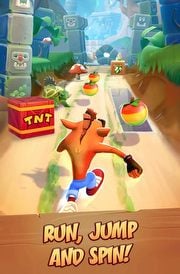 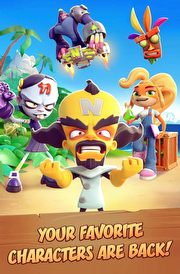 Crash Bandicoot: On the Run! is a side-screen of the platform cycle with the title marsupial in the main role. This free game is a representative of auto runners and was released on mobile devices by King. It is produced by the publisher's in-house studio, which previously created the Candy Crush series.

Crash Bandicoot: On the Run! combines the gameplay typical of auto runners with elements from the main Crash Bandicoot series. The character we control (from the third person perspective) automatically runs ahead, and we have to make sure that he or she avoids all obstacles: gaps, enemies, explosive boxes etc. From time to time we come across bosses that we have to beat in battle. We have not only the ability to jump, but also Crash's iconic slides and gadgets and weapons. These are unlocked as the base expands, for which we need special components, gained after completing the levels. An important role is played by the character's personalisation, which gains us additional points for style.

Crash Bandicoot: On the Run! is essentially a single player game. However, the game allows you to play with your friends (who play Coco Bandicoot) in asynchronous co-op mode. This allows us to help others without having to play at the same time. In the game you will also find rankings of the best results, both for teams and for individual players.

Crash Bandicoot: On the Run! graphic design has been almost transferred alive from the Crash Bandicoot N. Sane Trilogy remasters. The game was optimized for mobile devices, which required, among other things, the abandonment of many graphic effects. However, the style has remained essentially unchanged, and the whole thing does not differ in overall look from other platform games for smartphones and tablets.