Games similar to Middle-earth: Shadow of War - The Mobile Game 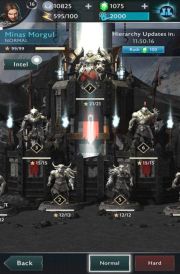 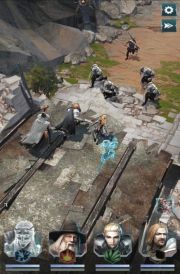 Middle-earth: Shadow of War is a battle strategy game available on mobile devices. The story of the game is set in Middle-earth  the land invented by J.R.R. Tolkien. The game is based on the free-to-play business model with optional microtransactions and has been developed by an internal Warner Bros studio. Even though the game shares its name with an action adventure game published on PC / Windows and consoles it is an entirely separate project developed exclusively for smartphones and tablets.

Middle-earth: Shadow of War for mobile devices offers a story that is quite similar to the PC / Windows and console version of the game. The plot revolves around the ranger from the North named Talion, who shares his body with Celebrimbor  a wraith, who is an astral form of the elf who had forged the One Ring centuries ago. The characters decide to forge one more ring and a set of minor ones. With these artifacts, they want to gather an army and challenge Sauron himself.

In spite of the similar story, the game features quite different gameplay mechanics. Instead of an action-adventure game, Middle-earth: Shadow of War for AND and iOS is a strategy battle game. During their adventure, players have to collect heroes, form a small team out of the selected few, and fight groups of enemies in real-time battles.

Each character features a unique set of statistics and special attacks. The game features a character development system, allowing a player to enhance their heroes' combat abilities and adjust their skills to particular targets. Interestingly enough, the AND and iOS release of Middle-earth: Shadow of War also features the Nemesis system, known from PC and console versions of the game. Some foes will survive and flee; however, they will never forget their defeat. When meeting them for the next time, a player is reminded about what he has done to them.