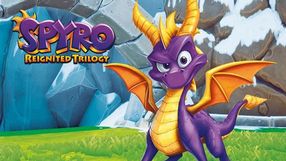 The Legend of Spyro: Dawn of the Dragon

The Legend of Spyro: Dawn of the Dragon is an arcade 3D platformer with a fearless purple dragon in the lead role. The title character joins forces with his former opponent, Cynder, and together they try to stop the forces of evil that want to control the fantastic world. The game was produced by Etranges Libellules studio, and in English language version the voices were lent to well-known Hollywood actors - Elijah Wood, Gary Oldman and Christina Ricci.

The Legend of Spyro: The Eternal Night

The Legend of Spyro: A New Beginning

The Legend of Spyro: A New Beginning is the next installment of the adventures of a friendly dragon. The new adventures of the purple creature were developed by the Krome Studios team and, according to their name, allow us to start the whole story from the beginning.

Spyro Shadow Legacy is an arcade game created by Amaze Entertainment for younger Nintendo DS users. The main protagonist of the title, the purple soother - Spyro, who sets out to rescue his brothers abducted to the Land of Shadows. The game takes advantage of the technical capabilities of a handheld platform, including a touch screen and an additional device display.

Spyro: Attack of the Rhynocs

Another part of Spyro's adventures. Twelve different worlds full of finds and enemies waiting for our hero to explore.