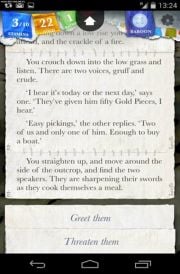 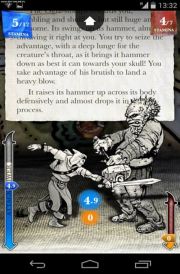 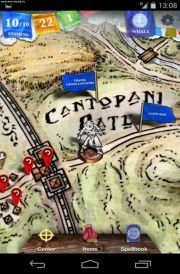 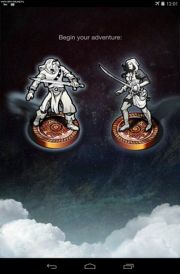 Sorcery! is a paragraph game for AND, iOS and PC. The production was developed by inkle studio.

The game is an adaptation of The Sorcery! The Shamutanti Hills, a popular pen-and-paper game by Steve Jackson, published in 1983. Set in a fantasy land called Titan, the plot revolves around an artifact known as the Crown of Kings, which gives supernatural leadership powers to anyone who puts it on their heads. Unfortunately, it was stolen from the land of Analand by an evil archmage who, thanks to it, subjugated the wild tribes of Kakhabad and used them to start an invasion on the neighboring kingdoms. Players take on the role of a lonely warrior, entrusted with the mission of recovering the crown and thus stopping the aggression against Analand.

Players explore the land, develop the hero, fight battles with enemies and make a lot of decisions, directing the plot on different tracks. The authors approached the project ambitiously and didn't just transfer the pages from the paper original to electronic format - their vision is rather a complete adaptation. We move around by dragging the warrior with our finger on the map, and the game is accompanied by numerous pictures and sounds. Compared to the original, the creators have also significantly expanded the freedom of action of the character. We can talk to almost any person we meet and explore the interior of any building. The biggest difference, however, is the combat system, which requires manual movement of the characters on the screen to activate attacks and dodges. At the same time, each battle is also described in rich prose, which creates a unique effect.

The audiovisuals aren't a direct adaptation of the paper prototype. The AND and iOS version of the game has numerous animations and cut-scenes, and the gameplay is accompanied by music and sound effects.