Development of the game Star Wars 1313 have been suspended and will not be continued.

Star Wars 1313 a third-person action game for adult players set in the Star Wars universe. The project was developed by LucasArts internal team, and other units of George Lucas empire helped to create the production  among them Lucasfilm, Skywalker Sound, Lucasfilm Animation, and Industrial Light & Magic specializing in special effects.

The game is a TPP action shooter created with a film-like flourish, enriched with strong adventure elements. The player becomes a bounty hunter working in the underworld of planet Coruscant. The name of the production refers to Level 1313 located deep below the surface of the planet and ruled by criminals. The character controlled by the player is an ordinary man with no superpowers that Jedi knights possess. Therefore, during the execution of his missions, he must rely solely on his own skills and an extensive arsenal of gadgets and weapons. The authors created a game full of spectacular exchanges of fire and impressive film sequences. The gameplay also features a shielding system and a lot of platformer elements.

Star Wars 1313 was designed for mature players, which is rare for a game set in the Star Wars universe. The production uses Unreal Engine 3.0 technology. 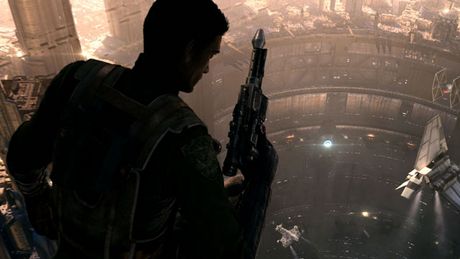 The most interesting Star Wars games that were cancelled

Have you ever wondered what Star Wars games you will never get to play? What circumstances have forced the developers to cancel their projects? And what have we all missed by these cancellations? Turns out that it's quite a lot.

An image has leaked into the net, which is said to be a screen from the deleted action game Star Wars 1313 from the no longer existing LucasArts studio.

Two more screenshots from the canceled Star Wars 1313 project have found their way online. As in the case of the previous leak, they show Boba Fett - the main character of the game.