The Flame in the Flood for PC, PS4 and etc. is another game financed on Kickstarter. It was developed by The Molasses Flood, a studio gathering former creators of such games as BioShock, Halo, Guitar Hero or Rock Band. The game tells a story of Scout, a woman trying to survive in a post-apocalyptic world, accompanied by her dog Aesop. They are traveling along a vast river at the end of which salvation allegedly awaits them. The route is not safe however, for the characters have to face a multiplicity of threats.

The gameplay in The Flame in the Flood for PC, PS4 and etc. is based on the standard survival mechanics. This means that the player's main goal is to stay alive in a hostile environment inspired by famous American places, such as the Everglades National Park, Mississippi Delta or the Bayou region. In order to survive, the player has to gather food and get fitter in the first place. However, this is only the tip of the iceberg, because the environment is full of dangerous animals, against which, the player has to constantly protect themselves. When the protagonist gets hurt, the player has to heal her with bandages and herbs. In order to rest for a while, it is crucial to find shelter, where the protagonist can regenerate by sleeping for a few hours.

Fortunately, Scout can manage in harsh circumstances, for she does not belong to those people unable to exist away from civilization. She is a very resourceful woman with all kinds of skills. Thanks to the items she gathers, Scout is capable of constructing certain tools helpful in daily survival. She is nonetheless as mortal as any other human. Thus the player has to be extremely careful - if she dies, one has to start over from the very beginning of the adventure. Aesop is of help here, because the dog recovers the items Scout was in possession of if she dies.

The Flame in the Flood for PC, PS4 and etc. offers atmospheric, comic-book visuals accompanied by the soundtrack created mainly by Chuck Ragan - an alternative country musician.

The Flame in the Flood Game Guide

This unofficial The Flame in the Flood guide was created to provide enough information to the players so they will be able to survive in the game&#8217;s world and reach the end of the story. 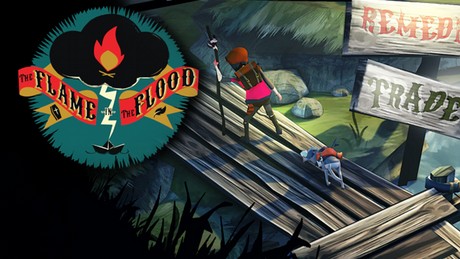 The Flame in the Flood is yet another survival game, similar to hundreds of others out there. Nice audiovisuals and an intuitive crafting system are not enough to completely forget about its repetitivness and lack of variety.

Microsoft has announced that another batch of games from indie developers is coming to Xbox One console. Among them are productions such as cRPG Wasteland 2 and The Flame in the Flood made by BioShock co-creators.

The Flame in the Flood survival game received a full release date. The new title from veterans of the BioShock series is going to hit PC and XONE, once its Early Access period is over on the 24th of February 2016.