We Happy Few is an original action adventure game set in an alternative retro-futuristic version of the UKs '60s. British indie studio, Compulsion Games, known for the game Contrast that features a similar atmosphere, is behind this production.

The game takes us to a fictional town of Wellington Wells, where almost all the residents live in perpetual happiness. However, this results from the use of a hallucinogenic drug and being misled by Uncle Jack (the local equivalent of Big Brother), who constantly watches everyone. The player assumes the role of one of the rebellious citizens, who refuses to give in to the system and must be always ready to fight for survival, for in this anti-utopia where anyone who stands out is ruthlessly eliminated. To reach our goals, we have to watch everything closely and understand the principles that rule this world.

The game is played from a first-person perspective. We have to explore the streets of the town, collecting and using various objects. Some of them will allow us to restore health (e.g. bandages) or break into houses (crowbars), while various types of weapons will help us fight our opponents. All the time we must act in accordance with the applicable rules of the local society, as unnatural behaviour can result is arousing someones suspicions and may end in our demise. The danger may be looming behind every corner, with many rooms being rigged with a variety of traps (such as smoke or poison bombs) and alarms. Every object that we use used in the wrong way may be a hazard. Even eating food saturated with the happiness drug in large quantities can lead to overdose and death.

The game world is procedurally generated, thanks to which well never find ourselves in the same town when playing again. The reality created by the Compulsion Games is exaggerated in a specific manner, although the idea behind the story itself is rather serious and draws inspiration from works by George Orwell and Aldous Huxley, as well as games such as BioShock. The graphic design is inspired by the studio's début production  Contrast  and the abovementioned BioShock. 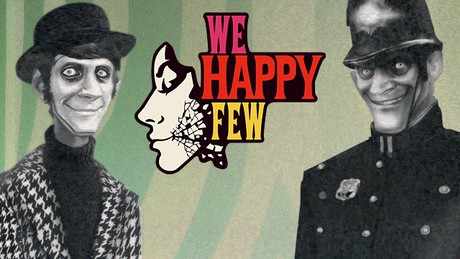 We Happy Few hands-on  its not the next BioShock

We Happy Few was one of the biggest surprises of this years E3 with its Bioshock-y esthetics and a dystopian vision of Great Britain of the 60s. This game, however, holds much more secrets.

We Happy Few, a dystopian action-adventure/survival from the creators of Contrast, is now available in Steam Early Access. Before the release the game is being sold at a reduced price.

More titles were added to the list of games banned in Australia. This time Kingdom Come: Deliverance got hit for its presentation of sexual violence. In addition, the sale of We Happy Few has been banned again.