There are many indications that we will officially hear about the Alan Wake remaster next week. The first information on the subject appeared in mid-June, when several entries dedicated to unannounced games were leaked from Epic Games Store's database.

As noted by Twitter user Wario64, the Taiwanese branch of the Rakuten store has added a product card for Alan Wake Remastered on PS4, PS5 and Xbox Series X|S. According to the information it contained, the title would go on sale on October 5, this year.

The revelation was confirmed by Daniel Ahmad, who works as a senior analyst at Niko Partners. We won't be surprised if the announcement comes during the conference to be hosted by Sony on Thursday, at 1:00 PM PT. 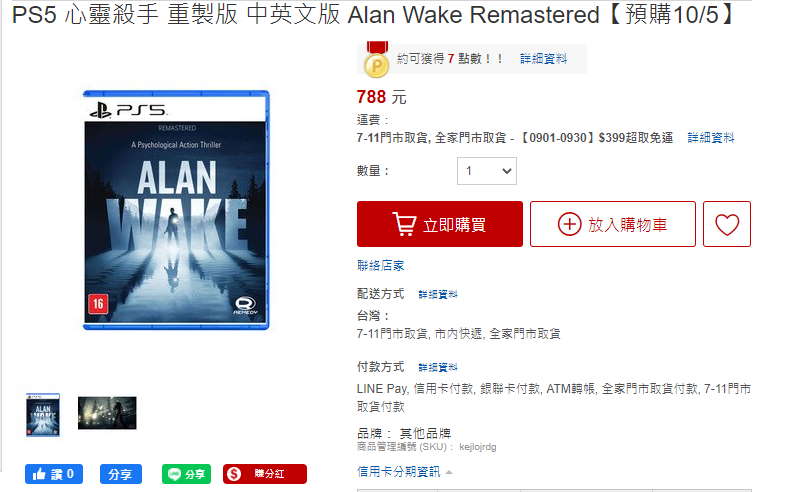 Screenshot from the Taiwanese branch of Rakuten.

Originally, the title launched in 2010 on Xbox 360 and was received very warmly. Two years later Alan Wake was released on PC, where it also received great reviews. It also lived to see two expansions (The Signal and The Writer) and a kind of continuation - American Nightmare. Let's hope that the remaster will significantly improve the visuals and correct all shortcomings of the game pointed out by the fan community.

Star Citizen Ads Were Misleading? Player Reported Them to ASA

The Witcher 3 Characters Made More Life-like Thanks to AI

Call of Duty: Vanguard has a Dog Problem

28 Minutes of Gameplay From Elex 2 Beta