The official announcement of new AMD Ryzen 5000 processors, based on the improved 7-nm Zen 3 architecture, is behind us. There are less than two weeks left before the store launch, but various leaks are surfacing online, showing performance in various benchmarks. This time we learned the result of AMD's weakest CPU from the new series in PassMark single-thread test. The mid-shelf AMD Ryzen 5 5600X dethrones Intel's most powerful unit on the market today - Core i9-10900K. 3495 points against 3177 points means more than 9% advantage for AMD. 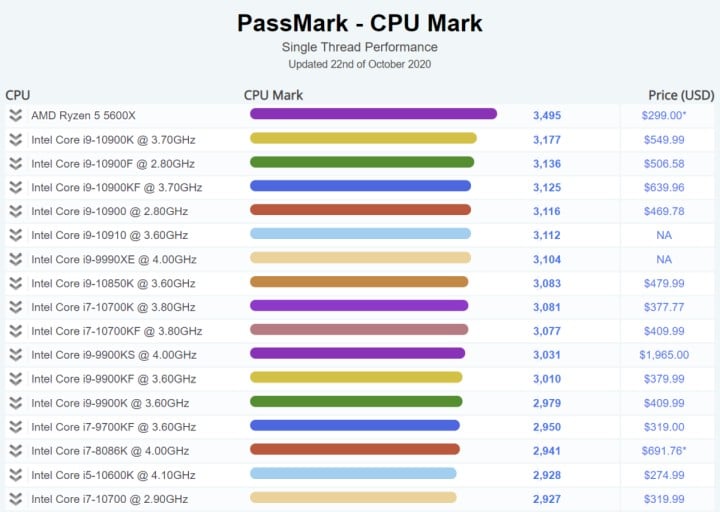 The AMD Ryzen 5 5600X came out on top of PassMark single-thread test, beating the competition, with Intel's Core i9-10900K at the forefront. Source: PassMark.

During the presentation, AMD announced a significant increase in single core performance over the current generation of CPUs, boasting a score of more than 600 points in Cinebench R20 single-thread test. The result of Ryzen 5 5600X in PassMark, which has a better score than its predecessor, Ryzen 5 3600X (2677 points), by 818 points, confirms that Intel may feel threatened. This gives more than 23% difference between analogous Zen 3 and Zen 2 models, which is quite a lot. Until now, the strength of Ryzens was mainly in multi-thread performance, but already in the previous generation we could see an improvement in single-thread benchmarks as well, and the results in PassMark database confirm the trend. However, these are only synthetic tests - in two weeks' time, when Ryzen 5000 reviews prepared by independent websites will be released to the web, we will see if they will work equally well in games. After all, this is much more important information for players.

The launch of AMD Ryzen 5000 processors will take place on November 5, this year. Finally, it is worth mentioning that until the end of the year there will be a special offer, as part of which Far Cry 6 is added to selected AMD CPUs. Unfortunately, it does not include the aformentioned 6-core and 12-thread AMD Ryzen 5 5600X that was tested in the benchmark. (in 2021 a cheaper version without an X may also appear ).

Emila Clarke Fought for Daenerys With a Human Face