Chronological arrangement of Assassin's Creed games proved to be quite a challenge. Ubisoft's titles are scattered across different eras, so one gamer undertook to arrange the games according to the location on the timeline.

On the timeline created by keithlaub we see all the installments of the Assassin's Creed series released on consoles and PC. Initially, the list was also supposed to skip Freedom Cry, which is a standalone expansion for Assassin's Creed IV: Black Flag, but the author decided to include it, precisely because of the new minicampaign. 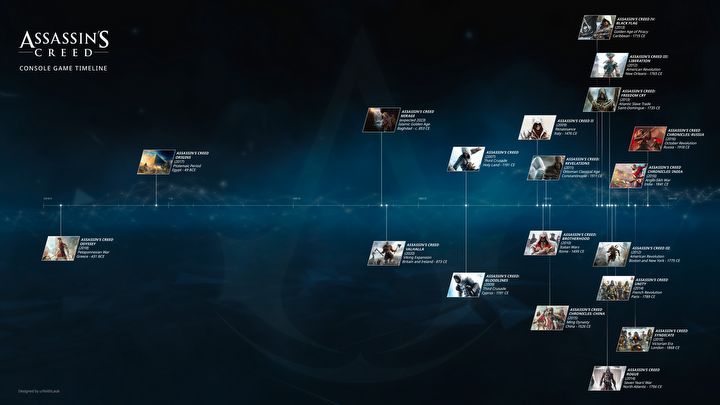 It is worth noting that on the axis you will not find, among others. Assassin's Creed: Altair's Chronicles or Assassin's Creed II Discovery. The games are set in the late 12th and 15th centuries, respectively. The games do not appear on the infographic because they were intended for the Nintendo DS. A similar fate befell the mobile installments of the series.

Ubisoft still has a lot of room for improvement

What caught the attention of players is the gap between AC Origins and the recently announced AC Mirage. Many have humorously stated that this is an ideal opportunity for Ubisoft to create more installments in the series.

What comes to mind at this point is Assassin's Creed: Red, although it is supposed to take us back to the time of feudal Japan (around 1185-1625). It is very possible that the gap will fit AC Jade - the action of the mobile title is to be set in ancient China (215 BC).

Finally, it is worth mentioning that the devs also announced Assassin's Creed: Hexe. The fourteenth main installment of Ubisoft's series will likely take us to 16th-century Germany. Here, as in the case of Red, the game will not bridge the gap between Origins and Mirage.