The launch of Xbox Series X/S is approaching. And so is the release of Assassin's Creed: Valhalla, because the new installment of the assassin franchise (at least by name) will be released on exactly the same day. Of course, not only on Microsoft's new console - the title will also be available on PCs, among others. So it would be a good idea to check if our PC can cope with the Viking invasion. The answer to this question is provided by the system requirements of Assassin's Creed: Valhalla, made available today on the official website of the game. The article also includes a video, in which developers describe the features of the PC release. 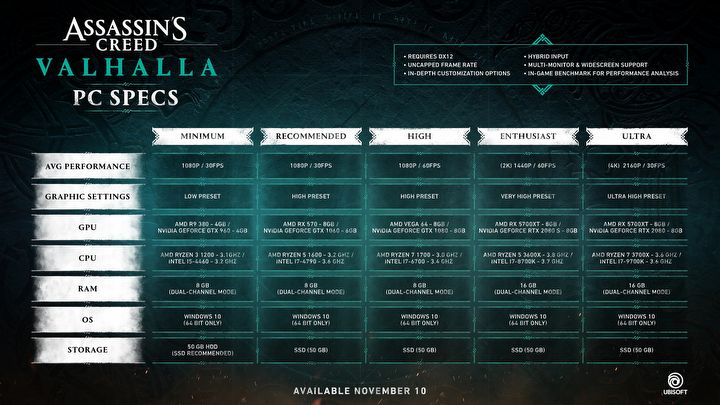 The six configurations give us a good idea of how demanding the new assassin will be. Those who love to play in 60fps will have to say goodbye to DirectX 11 and HDDs (or Full HD resolution) - only the weakest configuration does not require an SSD, and even there is is recommended. But there's no option to keep that much fps in 4K resolution - GeForce RTX 2080 with Intel and AMD high-budget models will only provide 30 fps. This may be changed by the designs like the new universally demanded GeForce models, but the lack of their mention in the case of Assassin's Creed: Valhalla makes this questionable, since they were mentioned in the previously disclosed system requirements of Watch Dogs: Legion.

Assassin's Creed: Valhalla will be coming to on November 10 on PC. The title will also hit Xbox One, Xbox Series X/S and PlayStation 4, and will also be available on PlayStation 5 on the day of the console's launch. In the meantime you can check out the new gameplay published by Ubisoft.