Mount & Blade II: Bannerlord arouses as much interest as controversy. One of the hot spots in the game is acquisition of fiefs by players. Very often their hard-won siege victories are ignored by kings, and the rights to rule the land are given to someone else, often the ruler himself. Additionally, players are often not even on the list of candidates for the fief. The greed of kings from Bannerland is explained by one user of TaleWorlds forum known as Bannerman Man. 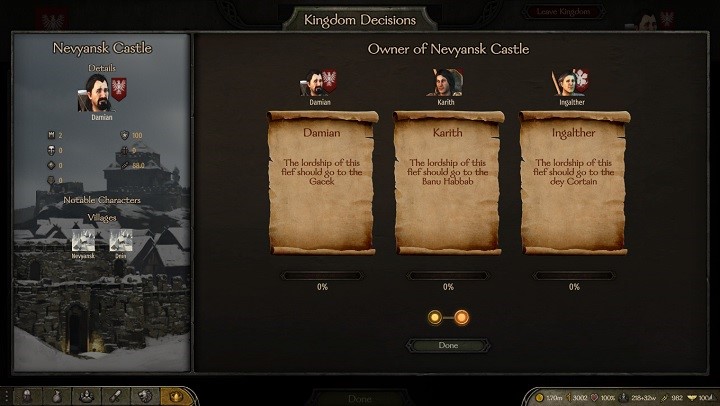 As a ruler, I have certain privileges.

Bannerlord players know that after conquering a castle or a city 3 lords are chosen to vote for the one who will take control of the fief. Although fans have figured out some of the rules governing this mechanic, the exact system of its operation has not been known - until now. Bannerman Man decided to do some digging in the game code and found a few lines that caught his attention. Later, he used them to create a formula that explains the rules of how the candidates for fief rulers are selected.

This is the equation created by the player. Author: Bannerman Man, source: TaleWorlds Forums

How to tame a city - general formula

It turns out that the chances of being on the list depend on merit, and there are many variables.

Looking at the above, it is no wonder that it is the king who is most often among those proposed to take control of the fiefdom. He gets a bonus for being a king, and usually has the most numerous garrison. Moreover, right after conquering the domain it goes under the wings of the ruling family (even before the vote), which in his case significantly shortens the distance between the closest settlements controlled by the clan. This seems to be a mechanic that is unfair, to say the least.

Unfortunately, Bannerman Man didn't look at what other lords do when choosing the final owner of the city. However, he suggests that the merit factor and, as you can probably guess, relations with other clans play a key role here too.

But the user's work has not been in vain. The problem of the unfair bonus for the ruler due to the distance of the domain was sent to the developers today. Who knows, maybe they'll refer to it in the next patch. Of course, the more impatient players can resort to looking for appropriate mods, one of which is Less Greedy Rulers, who is supposed to curb the kings' greed a bit.