The release of Chrono Cross: The Radical Dreamers Edition in two days, so the first gameplays and reviews have appeared online. The latter are quite positive, although their authors indicate that we are in for a rather lazy remaster. But let's go in proper order.

On April 1 Famitsu hosted a 1-hour stream from the game on its YouTube channel, running on either PS4 or PS5 (we do not know exactly). The recording of the broadcast - in Japanese - can be viewed below.

Considering that the discussed is a refreshed version of an jRPG from 1999 the graphics do not look bad, but ther are a little lacking in comparison to the level presented by, for example, Final Fantasy XII from 2006, which squeezed out every last drop of juice left in PlayStation 2. What's more, players commenting on ResetEra.com have pointed out serious frame rate drops in battles - from 60 to even 15 fps.

What exactly has been changed in the remastered Chrono Cross? You can find out in our previous post about this game:

The graphic filter, which was applied to the backgrounds, has also been criticized. They do not look very nice, especially since a much better effect can be achieved in an equally cheap way, using AI algorithms. Perhaps fans of the game on PC will live to see a modification analogous to Moguri Mod, which solves the same problem in the remastered edition of FFIX. Console players, however, will have to settle for what the developer has prepared - well, unless appropriate patches are released.

And how Chrono Cross: The Radical Dreamers Edition comes out in the opinion of the first reviewers? At least decently. Below you can take a look at the average ratings for each platform edition, collected by Metacritic.com.

A similar tone echoes in opinions collected by Opencritic.com - where the average score (for all platforms) is 75/100. What did the reviewers pay attention to?

A nice (and necessary) remaster...

In their opinion, the original Chrono Cross needed a remaster. Maybe not necessarily as superficial as The Radical Dreamers Edition - in general, according to many, a full-fledged remake would be most welcome - but at the moment it is the best opportunity to get acquainted with this jRPG classic. And in some ways it hasn't aged well. The story is still engaging, the characters are easy to get attached to, and the revamped soundtrack - once again prepared by Nobuteru Yuuki - "does the job". Similarly, the various types of facilitations, such as the ability to speed up fights, have been added.

...especially at this price point

Criticism was mainly voiced regarding the two aforementioned problems (unstable frame rate and backgrounds). In addition, lack of tutorials or not very intuitive game menu were pointed out. In the opinion of many, however, these shortcomings fade into the background when you consider the price Square Enix is charging for Chrono Cross: The Radical Dreamers Edition - the game costs $19.99 on Steam, in Nintendo and Microsoft's stores. 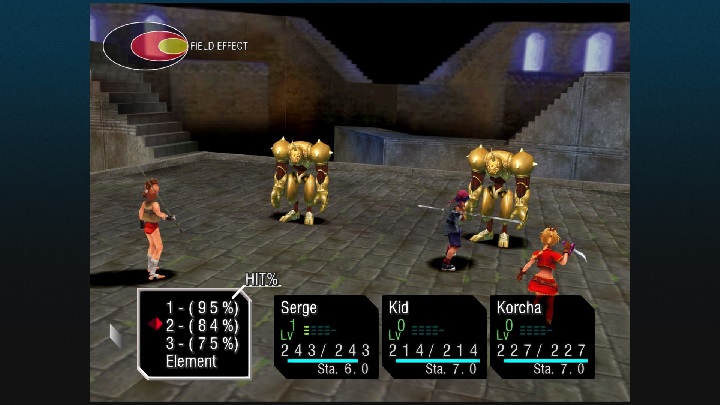 15 fps with such static fights is a bit too much. Source: Steam.

At the end, we provide the system requirements of the new-old Chrono Cross on PC. They are, of course, not too high.