In the summer of 2019, PC Building Simulator, a pretty popular title that lets you assemble and repair PCs, debuted on PlayStation 4, Xbox One, and Switch consoles. Unfortunately, these versions are slightly different from the PC one in terms of content. However, the Romanian team at Claudiu doesn't intend to leave it at that and develops editions for Sony, Microsoft and Nintendo platforms. The latest result of their work is the update 1.2.0. It can already be downloaded by owners of the title on Xbox One and PlayStation 4 (or Xbox Series X/S and PlayStation 5 thanks to backward compatibility). It will arrive on Switch at a later date. 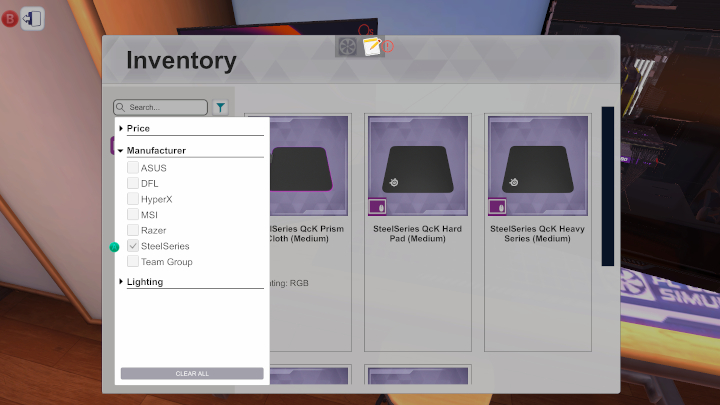 One of the highlights of the new patch is the item sorting tool.

According to a post on the official blog of The Irregular Corporation, the publisher of PC Building Simulator, patch 1.2.0 leaves the console versions of the title in a state similar to that of its PC edition after patch 1.10.1 (which means they're a good few weeks behind). Most notably, the update adds over 250 new components, led by AMD Ryzen processors and Nvidia RTX graphics cards. It's worth noting that the list of fresh items also includes things produced by companies with which Claudiu has recently partnered. We're talking about Kolink and SteelSeries, for example.

In order to make the growing library of components a little easier to navigate, the developers added special filtering tools for both in-game stores and items in inventory in the console versions of PC Building Simulator. Something similar has already been present on PC for some time.

Owners of PC Building Simulator on Xbox consoles can look forward to one more QOL feature. Patch 1.2.0 introduced full mouse and keyboard support on this platform. This is an element that the players have been asking for very often.

Finally, along with patch 1.2.0 console owners of PC Building Simulator received the opportunity to purchase all "workshop" DLCs. This means they will be able to assemble their computers in a Razer room bathed in green, a purple, white and almost sterile NZXT room, etc. Each such expansion costs around $5.

If we want to stay up to date with all the new information about PC Building Simulator, the developers encourage us to follow them on social media. We can find them on Twitter, Facebook and Instagram, for example.