Most of us have already come to accept, in one way or another, that most of our mobile devices, constantly connected to the Internet, send out some of our data. However, it's still not a comfortable awareness, so how will smartphone owners react when they learn that one of the two most popular systems on the market is collecting far more data than its competitor? Google could be collecting up to 20 times more information than Apple, one Irish academic has reported.

Professor Douglas Leith works in the department of computer science and statistics at Trinity College in Dublin. His paper on the data collection can be found here. It is the result of a test conducted by the professor, in which he used Google Pixel 2 smartphones running Android 10 and iPhone 8 on iOS 13.6.1 (with jailbreak). Both devices worked on a "fresh" system (restored to factory settings), properly updated. Different scenarios were tested - with and without a SIM card inserted, working in the background and during various user activities. 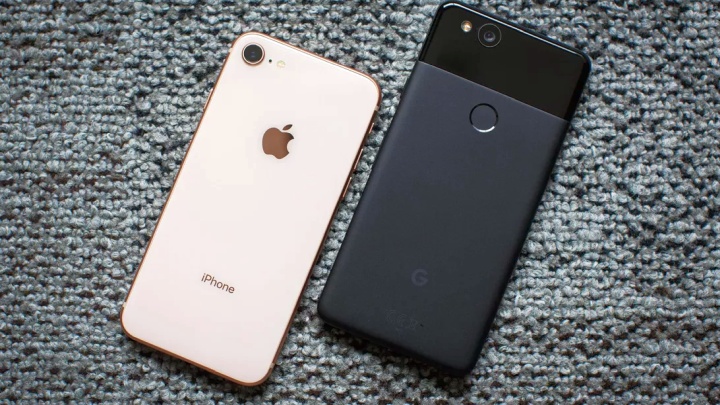 It turns out that each of the tested devices connects, on average, every 4.5 minutes to Apple or Google servers, even when lying unused. There are small differences in the types of data that are being sent and quite a lot in their quantity. Android smartphone shortly after launch sends about 1 MB of data, while iPhone about 42 kB. Left unattended for 12 hours, Apple device will send on average 52 kB of information, and Pixel 2 will exchange approximately 1 MB of data with Google servers in an analogous situation.

While iOS automatically sends data from Siri, Safari browser, iCloud, Android collects information from Chrome, YouTube, Google Docs, Safetyhub, Google Messenger, system clock and Google search bar. The categories of data collected when the user is not even logged in are shown in the table below, compiled by Professor Leith:

A summary of the data shared on our Apple and Google device when we're not logged in. Source: Douglas Leith

It's worth noting that in the U.S. alone, Google's servers collect a total of about 1.3 TB of data from an Android device over a 12-hour period. Over the same period, Apple collects about 5.8 GB from iOS. It is worth bearing in mind, however, that not always the transmitted volume expressed in bytes can reflect the actual amount of information. Much depends in this case on compression, protocols used, data encapsulation.

Google has already addressed the information provided by Professor Leith. Here's what a spokesman for the company, whose identity was not provided by ArsTechnica, had to say on the matter:

"We identified flaws in the researcher's methodology for measuring data volume and disagree with the papers claims that an Android device shares 20 times more data than an iPhone. According to our research, these findings are off by an order of magnitude, and we shared our methodology concerns with the researcher before publication."

He goes on to refer to cars, comparing them to smartphones:

However, the last sentences seem to sort of confirm the information published in Professor Leith's paper while talking about the benefits of data collection:

"This report details those communications, which help ensure that iOS or Android software is up to date, services are working as intended, and that the phone is secure and running efficiently."

Apple has also commented on this (as reported by ArsTechnica), explaining the transparency of the data collected and the ability to control it. The system informs about the collection of location and enables us to disable this option. Apple's spokesperson also pointed out the errors in Prof. Douglas Leith's report.

Both system manufacturers assure that location tracking can be turned off, but in the case of Android, unchecking the "Usage and diagnostics" box doesn't prevent sending telemetry data, which is required to use the device. Also IP addresses are being constantly collected, be it our own or those of nearby networks, which may enable someone to roughly determine our whereabouts.

Well, this news is probably best summed up by a quote from Professor Douglas Leith himself:

"Currently there are few, if any, realistic options for preventing this data sharing."