Last Friday marked the release of Crysis Remastered Trilogy, a set featuring refreshed versions of games from Crytek's FPS series. Unfortunately, the remastered set offers only single-player campaigns, while the original versions of these games featured multiplayer. That's why we thought it was worth taking a look at whether online skirmishes were still possible in the original editions of these titles.

Crysis and Crysis Wars? Yes, but only with mods

The console versions of the first installment didn't have multiplayer. On PC, fans could initially enjoy multiplayer in the first Crysis and then in the enhanced online module called Crysis Wars, which was bundled with Crysis Warhead. The servers for both were shut down a few years ago, however. Fortunately, in this case there are simple and safe modifications available to remedy this. What's more, in the case of Crysis Wars we can practically get the full version for free by making a slight change to the demo.

To restore multiplayer in the PC version of the first installment, you have to use the CryMP project. It enables us to log in to the CryMP Network, a fan-made networking system that replaces the original game's mutiplayer architecture.

Playing the first Crysis on some AMD graphics cards can be very tricky. If you have problems with this, then use the fan patches. There are two - for the 32- and 64-bit version of the game: 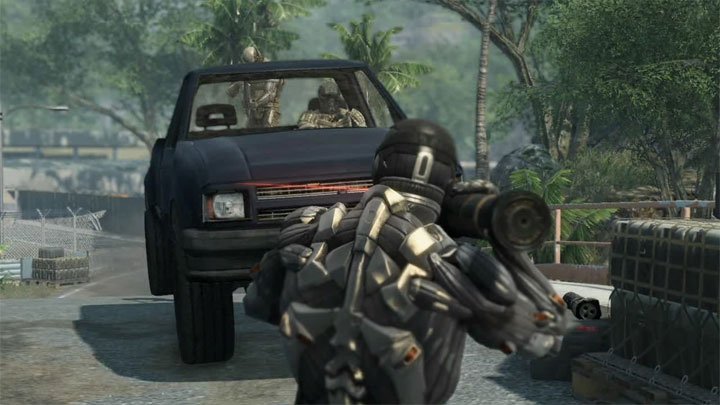 In the case of Crysis Wars there was also a fan-made alternative to the closed network infrastructure. Here, however, the situation is interesting in that the fans have come up with a way to lift the limits of the long-defunct trial version of the game. In practice, we get the full version of the network module for free.

What do I need to do to play Crysis Wars for free today?

After these steps you will be able to play the full version of Crysis Wars on fan servers. Optionally, it is also worth installing the Falcon mod. It changes the gameplay and some unofficial servers use it.

Is there anyone left to play with?

In both cases the player populations are relatively small, but you will usually find at least one server with a larger group playing. Fans often organize themselves for sessions on the CryMP forum or on Discord (in the case of Crysis Wars), so it's a good idea to keep an eye on these places to see when most people are playing. In addition, you can always just summon your friends, as there are plenty of empty but active servers just waiting to be used.

In the case of Crysis 2 the situation is a little different. On consoles, you can still play on Xbox 360 (and Xbox One and XSX thanks to backwards compatibility) and PS3. The situation looks worse on PC. Electronic Arts shut down the PC servers a few years ago. The game had poor mod support and as a result there is no simple fan modification to bring back the multiplayer.

Every now and then, some projects pop up on PC, such as NanoWars, but the problem with these is that they run on pirated versions of Crysis 2 and they have anti-cheat solutions that are sometimes hard to distinguish from malware. So this is an option only for the most desperate fans of the second installment. The rest should stay with Crysis 3 or return to the first game.

Finally, here's the easiest option. Despite being eight years old, the servers of Crysis 3 are still active on both PCs and consoles. Groups of players are not large, but more often than not there are no major problems finding people willing to play.

Xbox One and Xbox X/Series owners can play the title thanks to backward compatibility. Those who prefer to play on Sony's hardware will only be able to launch it on PS3, as newer generations of PlayStation do not support backwards compatibility. The good news is that the PS3 edition of the game is still available for purchase. Earlier this year the end of digital distribution of the title for this platform was announced, but fortunately this decision was eventually withdrawn. In the case of Crysis 3 this would have been particularly problematic, as the game has a lot of DLCs for use in multiplayer. However, it is difficult to assess how long such purchases will be possible, so those interested are advised to hurry. It's already impossible to browse this part of the store through a web browser on PC or mobile devices. Initially, fans developed a plug-in for Firefox that enabled us to do this, but Sony made sure that it stopped working.

On the other hand, if you want to play on PC, the CVar Configurator project is what you should try. It's a tool developed by a former Crytek employee that enables you to configure gameplay and graphics beyond what the game's menu offers. The most important feature of this app is the ability to customize Field of View. 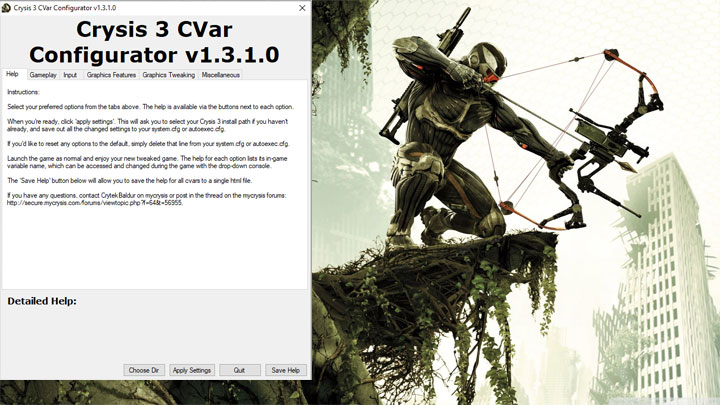