PCGamesN reports that Western retailers have begun discounting Cyberpunk 2077. The discounts are greatest for the console editions, which can now be purchased for up to 50% off. The price of the PC version available in physical stores has dropped by about 30%, to $39.99. The reports concern mainly the American market, although interesting offers also occur in other countries (e.g. in the UK).

The price on GOG and Steam platforms remains unchanged at $59.99. 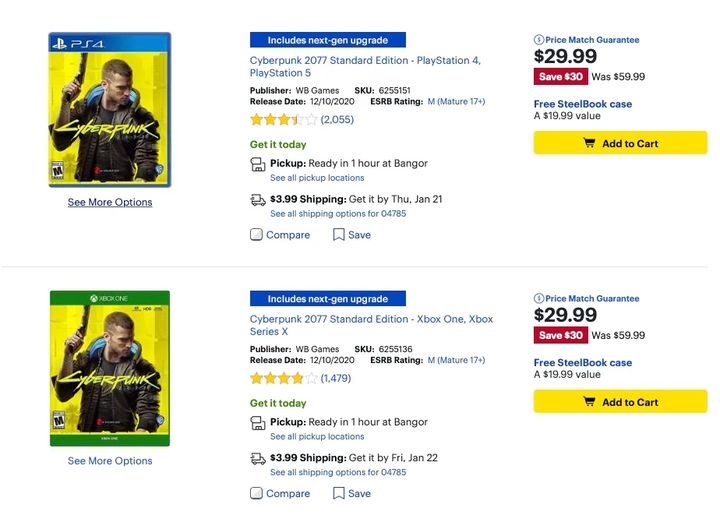 Considering the tragic technical condition of the console editions of Cyberpunk 2077, it is hardly surprising that they are heavily discounted. It's also important to remember that there was certainly a whole bunch of copies sold on the secondary market by players who were either disappointed with CD Projekt RED's new title but didn't refund it for some reason, or simply finished the game and decided they didn't want to keep it. This certainly didn't have a positive effect on sales of new copies. As for the PC version, the price drop can safely be linked to the controversy surrounding both the game itself and the developers.

Time will tell whether the price of Cyberpunk 2077 will remain low (which would certainly have a negative impact on CD Projekt's revenues and the company's stock price), or will return to a higher level after some time. Post-release support will also be of importance here - in a few days at the latest the first of the announced large patches, which are to greatly improve the technical condition of the game, will make its debut.

Japanese Gamers Offended at Sony for Lack of PS5s