It appears that Allen's public contrition and apology did not appease Ubisoft authorities. As reported by Eurogamer, which contacted the French company on the matter, the latter is taking the situation seriously and intends to "respond accordingly." Below you can read the full statement from Ubisoft's spokesperson.

"We regularly provide access and information on our games under NDA to trusted partners. When that trust is compromised, or information is leaked by an individual, it's not only damaging and demoralising to our teams, but it takes away from an exciting reveal moment and experience for our players. While we won't speak on an individual case, we do take these matters seriously and will manage accordingly."

Some of you may be familiar with the youtube channel Dan Allen Gaming, which presents many interesting facts from the world of gaming, where you can find guides, instructions and other useful information for gamers - all in a very harmless form.

At the same time, we have (or rather, had) the example of a mysterious Twitter leaker by the handle The Real Insider, who, in turn, seemed to have deep insight behind the scenes of the game industry. Since his early days, he has been revealing various information about a number of upcoming titles and events, such as the recent Ubisoft Forward presentation and the Assassin's Creed game that are to be announced during the event. 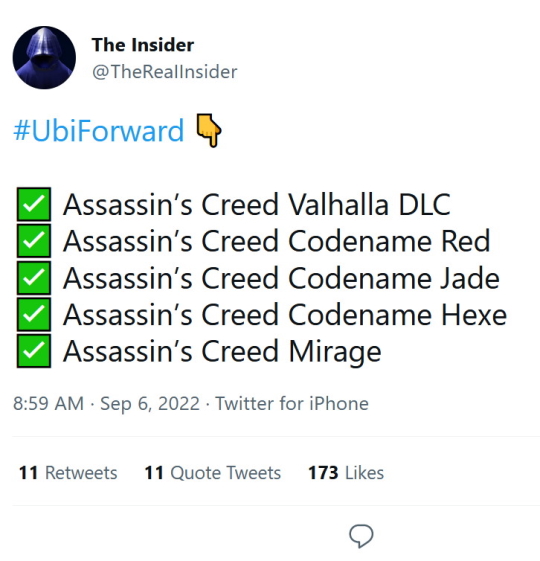 You will ask, what do these two characters have in common? Well, they turned out to be one and the same person.

How did this happen?

The leaker's entire facade of anonymity disappeared earlier this week, thanks to a classic social media blunder. Responding to a Twitter query to The Real Insider, Allen wrote the message from the wrong account. Admittedly, he quickly deleted the tweet, but nothing dies on the Internet. The matter was taken up by, among others, Bloomber agency reporter Jason Schreier, who compared a series of posts by this leaker with those from Dan Allen. These turned out to be very similar to each other.

How did the leaker get the secret information?

So how did the youtuber's "alter ego" - The Real Insider - come in to possesion of the information guarded by game developers? As Schreier stated, Allen was simply breaking the embargo on news he received from manufacturers by being a well-known influencer (via Kotaku).

Faced with the embarrassment, Allen quickly admitted to being The Real Insider and apologized for his behavior (you can see video footage below).

"I am sorry and ashamed of myself. I took some time to reflect on my bad decisions that should never have happened. I am sorry that I let down everyone who supported me over the years," he confessed.

Regardless of the sincerity of his apology, while admitting his guilt, he also confirmed the violation of multiple NDAs, which could carry severe consequences. It looks like Allen's social media humiliation will soon be the least of his worries.

Die by the Blade Release Date and Trailer

STALKER 2 May Not Launch Until 2025; Studio in Chaos, Leak Claims