NOTE! THIS IS NOT A REVIEW

This is a column with first impressions after the initial stages of the game, generally aimed at assessing if the production ported from mobile devices is playable at all.

We shall wait for Diablo 4. Diablo 2 Resurrected is a great and nice game so far, but we already know it inside out (not counting a few balance changes and new runes). No matter how much we love a given production, there comes a point where we want more, something different, with variety. Some new flavor of the plot, the world. Whatever that might be. And that's probably why Diablo Immortal pissed players off so much – because it was announced as mobile-exclusive. Then, someone retroactively came up with the idea of releasing this game on PC. And so, we got this peculiar game. I was afraid that such a candidly prepared port could turn out to be a disaster, but... it turned out quite playable, at least at first. The PC version suffers from a few annoying ailments, but in general – it delivers.

For better or for worse – this is exactly the same game as Diablo Immortal on smartphones. Same aspect ratio, same menus, almost identical HUD, inventory screens, stores, everything. Including the management of each of these things. As a result, some parts of the game can be operated intuitively, and others can't (eg. we can get tangled up in several overlapping messages if we want to quit them with the Esc key). So, the vibe is a little different than in Diablo 1, 2, 3 or other hack'n'slash games, which may be different from one another, but at the same time they all retained a certain set of instinctive moves. 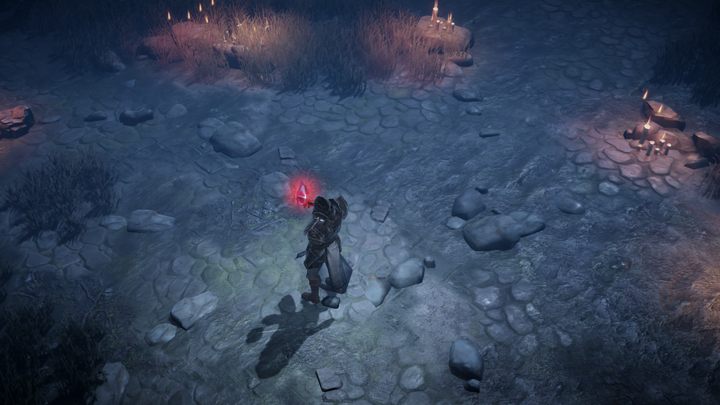 It sometimes seems simple, but it's actually strange and different – it's because the entire architecture of HUDs, backpacks and everything was originally designed with much smaller screens in mind and it shows, but... despite some inconveniences, this actually has more advantages than disadvantages.

First and foremost – there's total crossplay and crossave. So, we can play with friends, and two – we can switch between PC and the smartphone at any time to lead the same hero to battle, as long as we've linked the Battle.net account to Diablo Immortal on our mobile device. It's works in an incredibly convenient and intuitive way, doesn't cause any problems and runs real smooth. I can finish playing on one device, log out and start on the other from the spot. It was particularly useful for me, since I was able to prepare my character and run through the stages I knew from the beta on my phone, and then quickly get on with more interesting, new stages.

At the same time, Diablo Immortal promises to be a fairly comprehensive game, but in a different way than Diablo 3 or 2. There are fewer factors in the inventory and stats, and the skill system also looks simplified. However, more mechanics were binned, so that we could interact with NPCs who raise item levels, or deal with special, legendary gems. The latter can make our weapons a real tool of destruction (and this will probably be part of the character build system), because generally, at least at the beginning, the variety of gear doesn't blow your socks off.

Not only do we have the smart loot system in place – i.e. we find only gear that matches our class – but the whole game seems sleek and compact in these respects. In general, everything looks more like a frame of a simple, yet graceful MMORPG (thanks to this I was able to enter it without feeling overwhelmed), but the most important elements of Diablo, stay true to the spirit of the series in Immortal. Maybe even more so than in Diablo 3.

It was a bit of a shock to realize that this game... is darker than Diablo 3, even though the first presentations did not seem to suggest that. The visuals were built around similarly packed, slightly warcraft-like designs of characters, armors, etc., but the artists indulged in a more subdued color palette, without warm yellows and browns. There are more colors for which we love Diablo here. Even this "Warcraftness" comes with a large dose of gruesome environmental narration, with much more emphatic, bloody and disturbing manifestations of destruction.

In general, the graphics may not be dazzling, rather last-gen, and the action is observed from a bigger close-up than in other Diablo games (and the player cannot regulate it), but you get used to it – although it can be a little strange. On the other hand, it was also done to make crossplay fair. On top of that, the game runs like a charm, without any hesitation, at least on my, reasonably powerful rig.

If there is one thing that concerned me it was the micropayment system. Sure, the creators have to earn money, but after the first observations and conversations with a few colleagues from the office, I'm starting to have bad feelings. I haven't figured out this aspect yet, but compared to full-blown releases, Diablo has lost one important factor. NetEase has taken away the ability to control the magic find coefficient, i.e. the probability of finding exceptionally good magic items – at least in the context of the rift system, i.e. optional challenges where we could get the really good stuff. Now it depends on tokens which are obtained in small quantities daily, but can be bought for real money. We'll see how this system works in the long run, but I don't like it so far.

And most importantly – combat. Hell, I missed the combat system set in the Diablo universe, but without the frustrating, all-mighty Nephalems (we'll get to that later). Before I start singing praises, I need to indulge in some criticism. Each of the control schemes available on the PC (keyboard, pad, mouse + keyboard) has unique disadvantages. The most awkward controller to use is keyboard alone; pad would be perfect, if not for the fact that, at least on my controller, it was almost impossible to aim the Skillshot right, because the attack directions were giving access only to several angles between which you could jump, instead of offering a smooth range of attacks. This is a very serious problem – but it could be my Mad Dog, I bought it for peanuts. 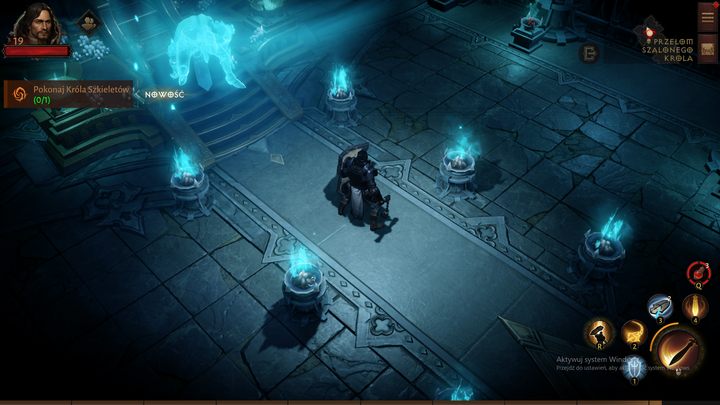 The mouse and keyboard (with mouse used for character control and basic attacks, and keyboard used for additional skills, calling menus, using potions, etc.) is a typical, not to say "classic," way of controlling Diablo, and I recommend spending some time on configuring it. The problem here is that the character can act in an unpredictable fashion when using a "charged" or skill-shot ability and walking at the same time (on mobile platforms, it works perfectly well and even seems basic). The hero moves a few steps towards the cursor, and then stops and launches a special attack. And then sometimes, it was hard to actually click the entrance to the next location, I hope the creators will make the hitboxes larger. But apart from that...

This game has a really great vibe of exploration and combat, also due to how closely the pace of animations follows our clicks – we won't experience any input lag here, our clicks sow death. You know. Diablo should be a dark adventure in which you descend into the dark underworld and smash demons with a zealous, mighty furry... And Immortal is a game that's exactly about that. My Crusader cuts, chops, squashes, jumps, brings down the wrath of heavens and jumps right into the chaos, and, damn it, it feels fantastic. Something about the animations makes it even better than Diablo 3.

So much better that despite all the shortcomings, I want to keep playing. Also, thanks to the fact that all the mechanics come together in an intriguing manner (let's hope there won't be a nasty paywall at some point in this game). There's also more of the classic spirit of Diablo here, in the story and atmosphere. The darkness and desperation are emphasized by the events on the screen (we can be a tough warrior, but that doesn't mean that we'll be able to save a little girl). 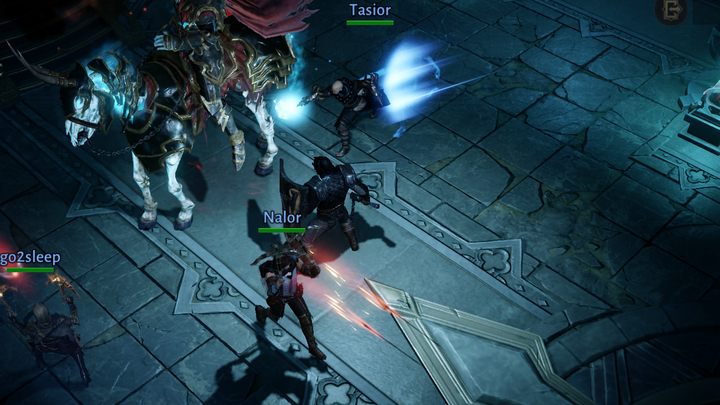 A pinch of humor in the characters' lines makes us convinced that we're dealing with people in the face of a cataclysm, and not with Nephalem superheroes from you-know-which-installment. NetEase was clearly taking notes on the achievements of Blizzard North (in Diablo 1 and 2). And for that, the game deserves a lot of credit. It doesn't feel perfect, but it is certainly interesting. You feel like you want to keep going. If the developers fix the mistakes, and the business model doesn't kill the fun, Diablo Immortal may turn out to be another, fully-fledged member of the hellish family. The coming weeks – as well as our reception – will decide about that.