It sometimes happens that striving for the best results at all cost doesn't get to you number one spot. Highs scores alone earn you any monuments. Let's take rally. This sport has seen many titans, who bended the laws of physics and did miracles with their four-wheeled monsters. Richard Burns, Sebastian Loeb, Tommi Makinen, I guess most motorheads have heard these names somewhere, even if they're not really into WRC. But one driver got particular fame – it was Colin McRae, the Flying Scotsman. He was a devil behind the wheel. His style was fierce, absolutely relentless. He was like an unstoppable force of nature. Rollover several times? No problem, as long as the car still drives... Just floor it and see what happens.

He learned to be a driver from an early age, under the supervision of his father, a national champion. Colin won the World Rally Championship only once, in 1995 at the wheel of the iconic Subaru Impreza 555, but if there's an iconic rally driver, it's him. He didn't always get the best time, despite supernatural driving abilities, because he pushed his cars beyond their limits and liked to show off. Most of all, however, he loved what he did – and how he did it. Not many of us will achieve the same greatness as McRae (though I keep my fingers crossed for you!), but I guess there is a lesson to learn here that can be translated into games, and beyond. It's a lesson about perfectionism and having fun. It has to do with the fact that sometimes, it's worth to let go of perfectionism for the sake of style – to approach any given activity with fun, rather than score, in mind. And to make it funnier – I arrived at this conclusion playing a game that wouldn't exist without Colin.

You love good car games, I love good car games too. It was never my genre of choice, but once got hooked on a rally game, I would be happily redlining it. You too, probably. As a kid, I had a super hard time getting over it if I didn't finish a rally, race, stage or a whole career mode in the first place. After school, I raced my ghosts in Colin McRae Rally 2.0 or the old Need for Speeds, often to the point of absurdity. And this happened not only in racing games. I did it in other kinds of games, but also in real life. And that actually would make me quite anxious. What should I choose – quality of fun, or quality of actions? Be a perfectionist, or just go with the flow?

Meanwhile... the new generation of difficult games teaches us – or at least me – to give up the frustrating perfectionism. Divinity: Original Sin 2, Dark Soulsand recently DiRT Rally made me realize it. They all did it in their own way, but today, I want to focus on hardcore rally, since I can't seem to tear myself away from it as of late. And I have fun even though I'm a complete noob.

I decided to take an immersive approach and not to restore my progress – I would reset failed stages as rarely as possible; I'd accept defeats. And I would just keep going. Inspired by the racing driver I mentioned. It took me a moment to adjust to this new mentality. And you know what? It turned out to be one of the best gaming decisions I made this year. I decided give up all the guides, play and learn DiRT in my own pace, t-boning the game's meta and anyone's expectations. 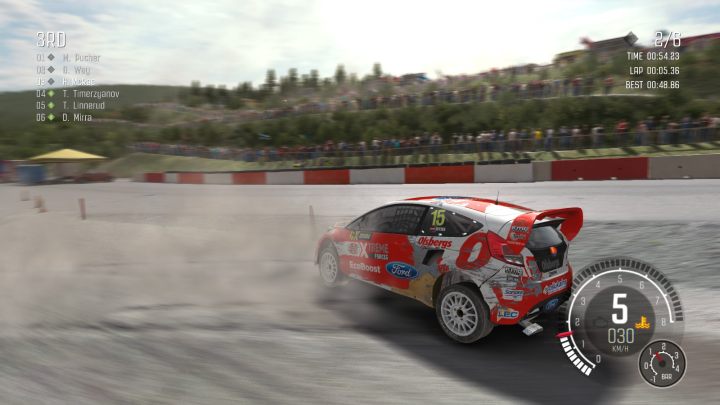 I didn't care about becoming a pro in the game. I enabled a reasonable number of assistances so as not to run off the track at every corner, and at the same time feel some of the cars' ferocity. And it can be done – you can configure DiRT Rally in such a way that it doesn't scare you away from completing the opening episode. Furthermore, the difficulty level resembles the old Colin McRae Rally 2.0 – a game that mixed realism and arcadeness in almost perfect proportions. To complete the blasphemy and the pleasure – after a few experiments I ignored the game pad, which is excellent for playing Forza Horizon, and went back to my racing roots – the good, old arrows on the keyboard. And then my immersion was complete.

It took a while to learn each car, but it could be done by way of trial and error. On the one hand, the driving model requires our constant focus, listening to the co-driver, looking at the road, watching the behavior of the car and minding every crest, and on the other, the game offers an unmatched feeling of battling the forces of nature and trying to control a four-wheeled monster that has its own strength, weight and whims. If we do it our way, in a style that suits us – satisfaction is guaranteed. What's more, while the driving model, especially without assistances (no thanks, I prefer to keep them on and be called a noob, maybe in time I will feel more like mastering the game, but not right now), provides a Dark-Souls level of experience in a rally game, the entire environment, mechanics, conversion factors and economy of the game support progress and forgive more mistakes than racing itself.

We don't have to be first to get promoted, and finishing second, third, fourth or fifth gets us enough money to save for a decent team, new cars or repairs. The ranking points are usually right as well. If we don't screw something up completely, the game won't really "punish" mistakes. Not too severely, at least. Meanwhile, it could have as well said "you're dead." It turns out it's possible to clock in a good time even without perfecting every corner, without perfect attention at all times, and even with a rollover – above all, the satisfaction from reaching the finish line after a spectacular episode is great. Even if, or perhaps "especially when," the car is seriously battered.

With time, I slowly started to develop my own driving style. The ability to understand the car I'm driving (hopefully I'll do that someday with real cars, just without constantly flooring them). I have achieved a certain balance in how I want to ride – when can I induce oversteer for the sheer pleasure of drifting, when to drive carefully and with conviction, and when to push it brutally forward so that the adrenaline jumps above the levels provided by online competition. And it just works for me. I was pushing forward, even though I won just one stage.

The car ended in a ditch, bruised, I had to finish one route on the first gear because none of the others worked. Once or twice I messed up so badly that I had to pass on the entire event. But still, I was somehow able to keep going, and I was getting more and more fun from the game, too. I understood DiRT Rally better and better, because driving itself was more fun than keeping track of my stats. Yes, these are important, and the game certainly has plenty to offer to people who enjoy maxing out achievements and perfecting their abilities – and that's great, because we all enjoy watching the flawless runs of the pros in full simulation mode.

It's good to have a proper skill, but once we turn it into a mandatory element of our experience, we're putting ourselves on a leash, and it might be increasingly hard to get any fun out of it all. Besides, isn't that true with other areas of entertainment? Haven't you always felt like reading a book, watching a movie or TV show, but then decided you didn't have time because keeping up with the latest releases and premieres seemed more important? Be that the current trends in arts or indie cinema, watching all the Oscar movies, or just ticking off "top-10" lists. Meanwhile, wouldn't it be fun to experience what you want, in your own pace?

There's nothing wrong with perfectionism. In DiRT Rally , it requires a lot of time, but then pays back with the results. And it's similar in life – if you do have a knack for something. Remember, however, that there are more valid approaches to electronic entertainment. Some will be thrilled to max out the platinum, while others will only get vexed and angry. That's why it's worth to choose your own direction, method and pace. And the skills...? Skills and knowledge... they will come eventually if you're only persistent enough. The point is that when you're having fun, you won't even notice that moment because it will be completely seamless.