Final Fantasy VII Remake Intergrade debuted on PS5 in June this year and remains a temporary Sony exclusive. The deal will reportedly last for at least six months. So it seems that the game could be coming to other platforms as late as December or early 2022.

The likelihood of this actually happening has just grown. In fact, user HazzadorGamin noticed that an interesting poll was published on the Twitter of the Chinese branch of Xbox. It asked what female protagonist from games available on Microsoft consoles players like the most. Among the proposed characters was Tifa Lockhart. 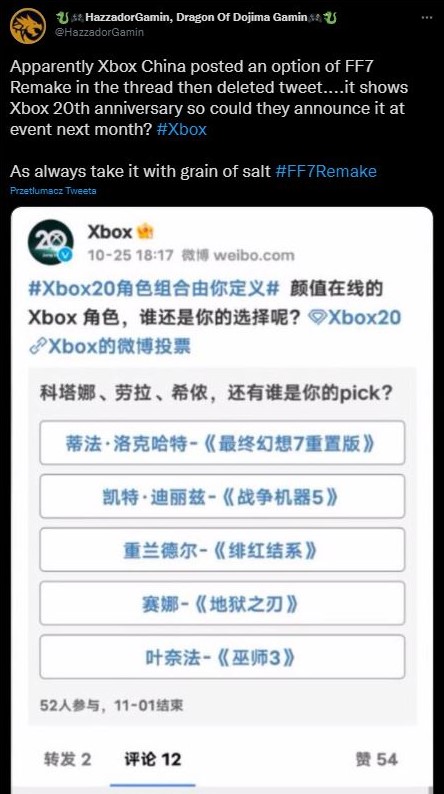 This wouldn't be surprising, as the character also appears in the original version of Final Fantasy VII, which is available on Xbox consoles. What is suspicious, however, is the reaction of those running the profile, who removed the option to select Tifa from the poll after a short while. It's possible that they considered its presence to introduce too much confusion among the players. Some, however, believe that it may mean an imminent announcement of a Final Fantasy VII Remake port for Xbox consoles.

At this point it's hard to say which scenario is more likely. After all, these are just speculations based on a poll posted on Twitter. However, it is possible that the first signs of the remake's expansion are indeed appearing online.