Asobo has released new video from Microsoft Flight Simulator. The video focuses on presenting the game's multiplayer features. It shows that MSFS will draw in spades from the MMO genre.

The devs' goal is to create a great online world, where we will meet not only other players but also real pilots. The game will recreate all flights taking place in real life, based on information taken from databases tracking aircraft movements. If we lose our connection to the Internet, AI will take over the simulation of air traffic.

Microsoft Flight Simulator will enable us to choose several multiplayer variants. In Live Players mode, we will have to follow the rules and regulations governing flight traffic. The game is to dynamically change the weather conditions in the virtual world so that it reacreates the real ones. If, for example, a storm is taking place over Paris, it will also take place in the simulator. In this variant, during the game we will encounter players who have decided to use this mode.

The second option is All Players, in which will see all players in the skies, regardless of which multiplayer option they have chosen, the only exception being multiplayer limited to their own group. We will choose the weather ourselves and configure most of the flight conditions. This mode is designed for people who simply want to explore the world without following the real rules. 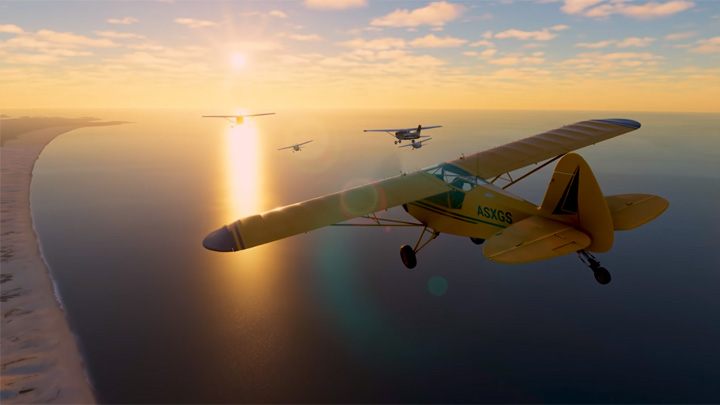 Multiplayer in Microsoft Flight Simulator promises to be impressive.

The third option is Groups. In it, one player creates a group, deciding who joins it and configures flight conditions. In this mode, we will see only other people from our group in the game world.

All this is driven by a complex online infrastructure. Microsoft will place clusters of servers in different parts of the world, and the game will choose the best one for us so that we can always have a stable connection. However, there will also be an option to manually select a group of servers, for example, if we want to fly with a specific group of friends who are on another continent.

To limit the load on the servers and our computers, the game will only display air traffic within a radius of 200 km from the player's position. At the same time, the number of planes displayed at the same time will be limited to 50, so if there are more planes in our environment, we will only see half a hundred of those closest to us.

Microsoft Flight Simulator is coming to PC and Xbox One. The release is scheduled for next year. The game will also be available as part of Xbox Game Pass.