Adam Badowski, the head of CD Projekt RED, decided to respond to yesterday's article about the problems which allegedly occurred during the development of Cyberpunk 2077. If you were hoping for a juicy polemic, you'll be disappointed.

Let's recall that accusations formulated in the article by Jason Schreier talk about a number of problems in studio's management, which can be mostly attributed to Adam Badowski. Badowski, called to the board, posted a response to some allegations of his choice However, the most serious ones have been omitted, focusing on the lesser problems.

At the beginning of the response, the allegation that what we saw at E3 2018 was not a real demo is explained by the fact that Cyberpunk 2077 did not exist in practice. While Badowski's response doesn't definitively deny this allegation, he clarifies by saying that a game's development process is unique and many ideas ultimately don't find their way into the finished product. According to the dev, the demo itself wasn't a fake, because it found its way into the final game in a very similar form. In fact, the head of the studio emphasizes that the final result is better than what was shown at the fair.

Another accusation that got an answer is one of the most absurd in my opinion, namely studio's employees speaking Polish in front of people who didn't know it, which was supposed to lead to discomfort. Badowski points out that during meetings about the game everyone uses English, the same is true for internal text communication. This is required by company policy. He also adds that it's quite normal in a multicultural team for people to use their own language in private conversations, and no one reprimands them for that.

At the end, one more sentence mentions that the allegation that the majority of the team said directly that they will not make it before the 2020 release is not true. Schreier talked to more than 20 employees, which is a minority in a team of several hundred people.

So, as you can see - the response does not discuss the serious allegations, but just nitpicks at certain aspects of the article, rightly refuting the argument about the use of the Polish language in a Polish studio. If anyone was hoping that the head of the studio will refer to more serious accusations, including those accusing him of causing some of the problems currently experienced by Cyberpunk 2077, they will feel very disappointed.

In response, Schreier invited Badowski, but also the whole team to contact him in order to clarify the information he provided in his article. I don't think, however, that anyone from CD Projekt RED will agree. 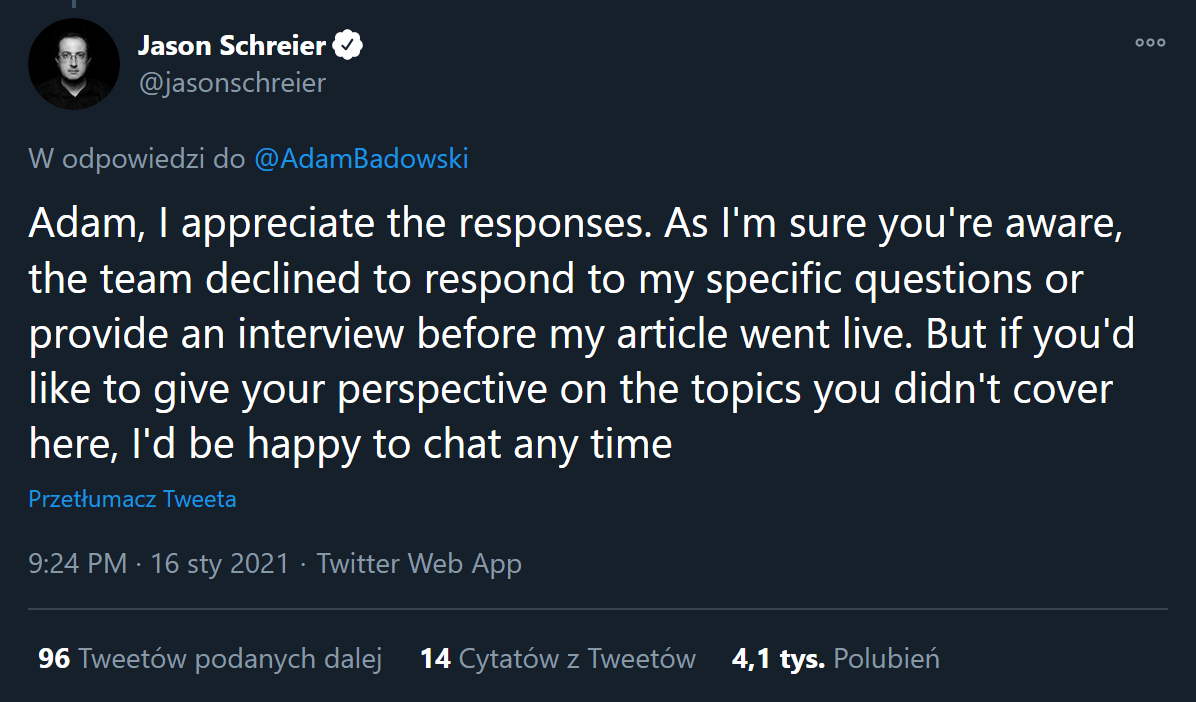 One of Xbox Series X/S Features is Harmful to Environment

Cyberpunk 2077 Taken Over by Rust