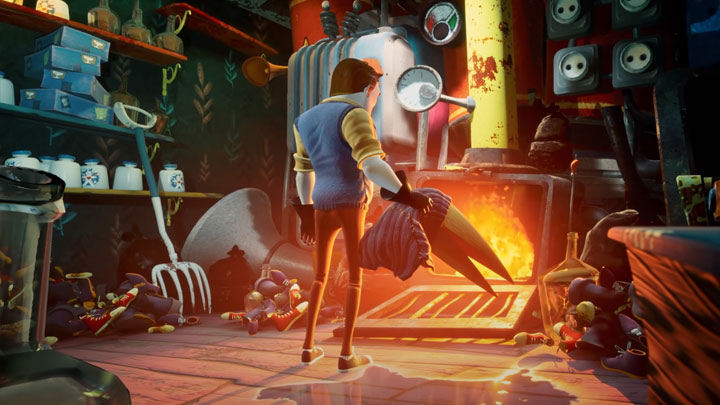 The Alpha 1 version can be played now. The full version will debut next year.

TinyBuild has announced Hello Neighbor 2, a continuation of the popular 2017 stealth game. The game is coming to PC and Xbox Series X. The release will take place next year. For PC users, the game will be available both in Microsoft Store and on Steam. This is an important piece of information, because the prequel, Hello Neighbor: Hide and Seek was an exclusive Epic Games Store title for 12 months.

The fans of the series will be happy to know that they won't have to wait until next year to play the sequel. The Alpha version 1 of Hello Neighbor 2 has already been made available for free to everyone on Steam.

In the game we play the role of a journalist named Quentin, who goes to the town of Raven Brooks to investigate the mysterious disappearances of local residents.

Hello Neighbor 2 will offer an open world, covering the town and surrounding areas. During the exploration we will have to avoid the AI that hunts us. It will be much more advanced than in the previous part. In the first game its movements were determined by a series of navigation points defined by the developers, shaping patrol routes. This time the AI is to be completely dynamic. It will analyze the player's actions and the traces left by the player and use this data to decide how best to stop us.

Work on the game began even before the release of the multiplayer spin-off called Secret Neighbor, so the project is already at an advanced stage of development. Hello Neighbor 2 is being developed by Eerie Guest, which used to be known as Dynamic Pixels. The team created the whole series and its name was changed after tinyBuild bought the company together with IP rights this year.

Witchfire - What About the Game From The Astronauts?