One of the developers at Riot Games - Mark Yetter - reported yesterday that the developers are already working on improving the clarity of the new items icons. He also released graphics with examples of planned changes.

Less than a week ago, a pre-season update came to League of Legends, adding completely new items, as well as slightly changed store and inventory system. Season 11 will begin on January 8, 2021, so the developers still have plenty of time to refine the new items, and gamers do not shy away from pointing out what could be done better.

The biggest complains are related to the changed item icons, which, according to many, are too similar in color, too detailed, and should be toned down, because some of them are hard to distinguish when displayed in low resolution. The devs should also add more contrasting backgrounds. Examples of icons that are too similar can be found in the graphic below, which was provided by former professional LoL player Marc "Caedrel" Lamont. 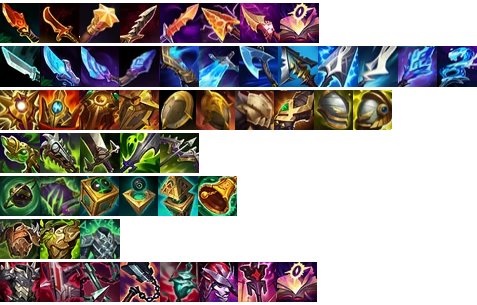 In addition to this, the players also note that the in-game store does not yet include useful features such as the ability to zoom in or out its window, permanent displaing of purchased items, or a clearer indication that we already have a mythical item (you can only have one during a match). In addition to this, minor cosmetic changes are also proposed - a different font color in the descriptions, as well as an improvements for color blind mode (currently it works poorly with new items in the shop).

It is worth remembering, however, that the only first week of pre-season changes is behind us. As some people rightly pointed out, although there is still some room for improvement with the new items and the shop, many problems arise simply from old habits, and the developers still have time to improve everything. I think the introduction of new items to LoL was a step in the right direction, as it made the gameplay change significantly. However, I'm among those players who prefer to wait until the new features are closer to the final version, so I'm still holding back before checking everything on my own.