New World two days ago broke through the threshold of 41,000 simultaneous players. Many say that although the game has come a long and winding road since its release, its current state is incomparably better than it was almost a year or even a few months ago.

In the last 30 days, the game has been played simultaneously by up to 41,256 people. This is thus the best result since this February. What's more, since the beginning of September, the number of players seems to have been steadily increasing and has reached more than 30,000 a day for most of the time.

This is quite a progress if these results are compared with the situation in June/July, when an average of 18,500 people were in the game daily. 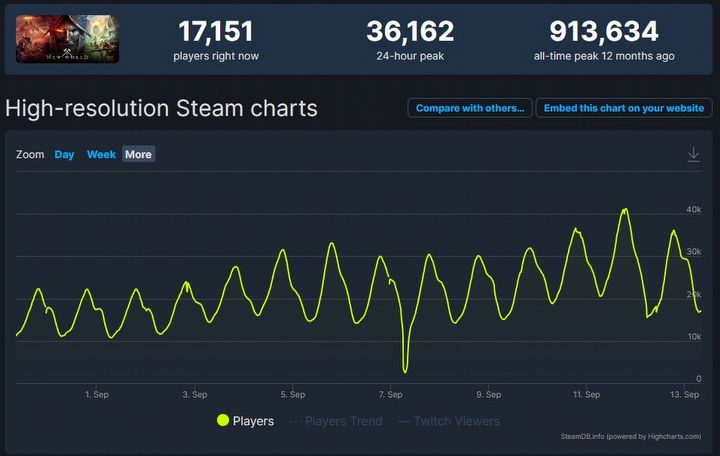 Many players have recently decided to give the MMO a second chance, and surprisingly they are not disappointed. Similar voices could also be heard in April. Although the servers were empty at the time, the faithful New World players were able to notice a considerable improvement in the quality of gameplay. This is also the case now.

"They raised the level of expertise to 625, added mutations to expeditions that reward better loot, new weapons, reduced the cost of fast travel (20 is the max), increased the storage capacity, reduced the weight of items and finally added a new trade skill (music).

So, as you can see, New World now offers something to do. Importantly, the developers are updating the game all the time (which is especially important for the players). In addition, a DLC has been announced, titled Brimstone Sands, which will introduce a brand new desert area, weapons, enemies and dungeon to the game.

The DLC is expected to be released in October this year, so one can speculate that some players have returned to New World precisely because of the upcoming novelty. More on the content of Brimstone Sands can be found here.

Grimgrad is a Dark Game About Building a Slavic Village

Zelda: Breath of the Wild 2 Release Date and Official Title

Grimgrad is a Dark Game About Building a Slavic Village