Fans of virtual skies can get ready to buckle up again, because Microsoft Flight Simulator will receive two large portions of content on November 18 - one free and one paid. Thanks to the first of these, both those who own the game and those who download it as part of the Xbox Game Pass service will be able to enjoy its Game of the Year version. The content offered for purchase, on the other hand, is the first major expansion for MSFS titled Reno Air Races. It will introduce licensed STIHL National Championship races and 40 unique aircraft.

The free version of GOTY will offer five new aircraft (these include the Boeing F/A-18 Super Hornet, famous from the new Top Gun movie, VoloCity, Pilatus PC-6 Porter, CubCrafters NX Cub and Aviat Pitts Special S1S), eight previously inaccessible airfields (three each in Germany and Switzerland, and two in the United States), six additional missions (discovery flights that will be available to locations such as Helsinki, Freiburg im Breisgau, Mecca, Monument Valley in the U.S., Singapore and Cook Mountain in New Zealand), tutorials, eight more photogrammetric cities (the aforementioned Freiburg and Helsinki, plus the British Isles' Brighton, Derby, Eastbourne, Newcastle and Nottingham, and the Netherlands' Utrecht), a revised weather system, and early support for DirectX 12.

So, November 18 seems like a good time to start your adventure with MSFS - if you haven't already. 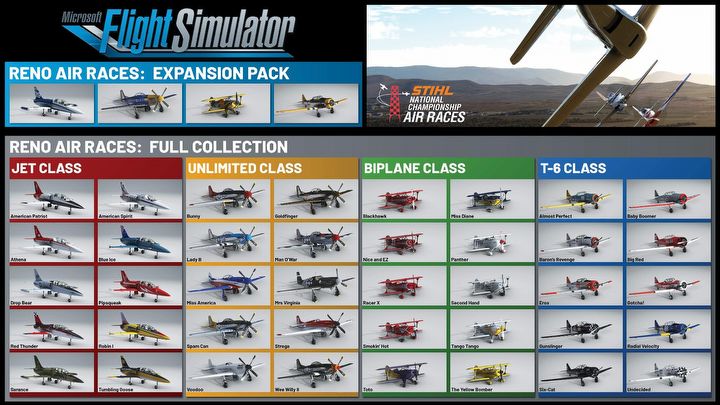 Reno Air Races add-on is aimed more at veterans of the virtual skies. It will be available for purchase in two editions. For 19.99 dollars we will buy a more modest version called Expansion Pack, which will offer four aircraft (these will be: T-6 Texan, P-51 Mustang, Aero L-39 Albatros, and Aviat Pitts Special S1S) and the ability to race against other players in multiplayer mode. The more expensive Full Collection edition, costing $59.99, will include more new planes (40 in total - see the image above), as well as the aforementioned licensed STIHL National Championship race mode.

GOTY version of Microsoft Flight Simulator as well as the Reno Air Races expansion will be available on both PC and Xbox Series X|S.