Almost a year after its debut on PC, Microsoft Flight Simulator is coming to consoles - specifically, the Xbox Series X and S. There are still eight days left until its release, also in Xbox Game Pass, but impatient fans of virtual flying are already checking to see if the title can be pre-downloaded (at the moment, no). One such person - Twitter user known as Idle Sloth - noticed that when selecting the "Manage with Game Pass" option, the game's approximate "weight" is displayed: 97.2 GB. 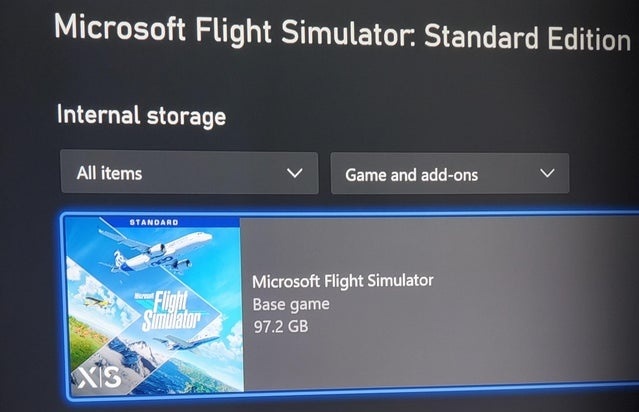 That's quite a lot, although no less than the PC version, which, although slimmed down some time ago from 170 to 83 GB of data, still "weighs" over 100 GB without any add-ons. What's more, description of the product in Microsoft Store suggests that you may need even more free space on the disk - up to 150 GB. As a result, the final size of the game will probably depend on which console you want to download it to: Xbox Series X or S. The differences are expected to be seen primarily in display resolution - the more powerful configuration will offer an image in 4K, while the weaker in 1080p.

Along with the release of Microsoft Flight Simulator on 9th-gen hardware also PC users will receive a significant update, along with which the version of the game will change - from Sim Update 4 to Sim Update 5. Within its framework the devs will improve, among other things, performance and tree draw distance. It is also worth remembering that the title will receive cross-play and cross-save features, which means that it can be played interchangeably on the PC and on console.

The launch of Microsoft Flight Simulator on XSX|S will take place on July 27. In the meantime, we remind you about the expansion announced for November - Top Gun: Maverick.

Tencent Wants to Acquire Devs of Crackdown and Sackboy; Impressive Amount at Stake