Today's X019 could not miss Minecraft. Microsoft unveiled a new extensive gameplay from Minecraft: Dungeons and revealed the game's approximate release date. In addition, the publisher shared the details of a special event waiting for the players in the mobile Minecraft Earth. 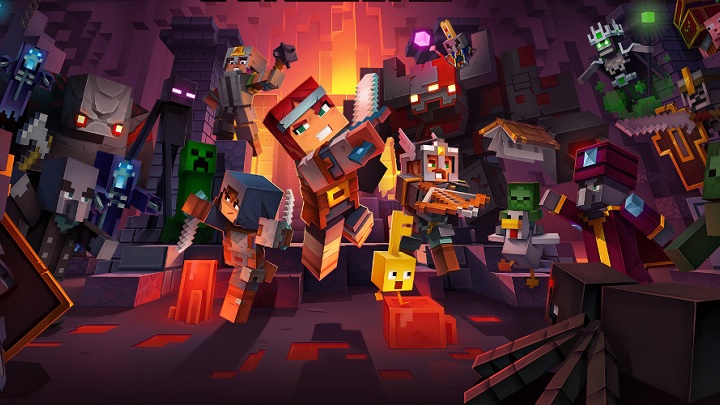 Darkness, lava and monsters - it is impossible to feel safe in minecraft's underground.

A comprehensive presentation of Minecraft: Dungeons was accompanied a commentary by David Nisshagen, the executive producer of the project. The creators focused on the key elements of their work, in which the main role is played by traversing the procedurally generated dungeons, beating opponents or, finally, progressing our characters in combat and gaining better and better equipment. Although there's nothing to stop us from going underground on our own, the game is designed with the cooperation mode (online or local) for up to four players in mind. Minecraft: Dungeons is coming to PC, PlayStation 4, Xbox One and Nintendo Switch, and will launch in April 2020.

When it comes to Minecraft Earth, so-called "Mobs at the Park" will appear in London, Sydney or New York. What are they? Figures presenting the game's "mobs", like Muddy Pig, Moobloom in the scale of one to one, and, prepared specificaslly for the discussed title, Jolly Llama. Each of them will be equipped with a QR code, the scanning of which will provide the players with access to adventures related to them. Completion of the latter will result in pre-release access to Jolly Llama.

The figures can be found in New York's Hudson Yards, London's Queens Walk and Campbell's Cove in Sydney, and will remain there on three weekends - November 16-17, November 23-24, as well as November 30 and December 1; they will also visit New York on this year's Black Friday, November 29. It is worth noting, that they will not be available for players around the clock, but only from 10 AM to 7 PM local time.