Dust after the introduction of update 1.5 to Cyberpunk 2077 has long since settled, and CD Projekt Red has recently appeared in the news due to the studio's 20th anniversary and the fact that the company is no longer in first place in the category of the most valuable game developers in Poland, giving way to Techland. To celebrate its twentieth birthday, the developer has prepared a series of streams in which it discusses various issues related to its games. So far the streams have focused on The Witcher, but it is very likely that soon we will learn something about Cyberpunk. This is suggested by the traffic on Steam, noted by SteamDB. 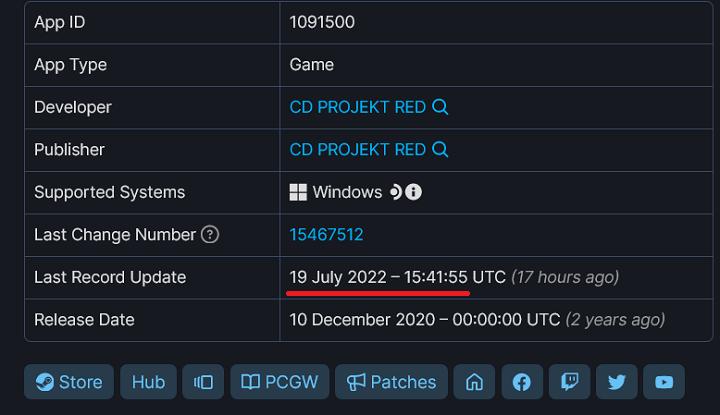 On the subreddit dedicated to Cyberpunk 2077 a user by the handle khaled121 noted that developer's activity has been spotted on SteamDB, where you can check all sorts of information about Steam games, (technical details can be found here). As a result, fans of Cyberpunk began to wonder if this means that in the near future the developers will announce update 1.6. It is possible that this will happen during one of the studio's 20th anniversary streams.

What do the fans expect?

In the comments under the thread on Reddit, fans began to wonder what update 1.6 should introduce. Most fans of Cyberpunk would probably be happy if the game would soon receive a DLC expanding the storyline. From the comments, however, one can learn that many people want the latest update to enable us to start a new game+, so that you can start all over again, but with a character that has the same stats and equipment as after completing the previous playthrough. An interesting opinion was shared by user Zestyclose-Fe6719, who wrote:

"I think it would make more sense to release update 1.6 with the debut of the anime Edgerunners."

Recall that the anime Cyberpunk: Edgerunners will debut on Netflix this September.

PowerWash Simulator - How to Buy and Change Skins