Debug mode is used by developers to test apps and is unavailable to regular users. Why not? It enables one to bypass system security and run one's own software on the consoles, This can lead, for example, to the creation of firmware that makes it possible to run back-up games, cheats, mods and emulators. A cracker nicknamed theflow0 showed off his latest achievement by posting a screenshot of an unlocked debug mode in the settings menu of PlayStation 5: 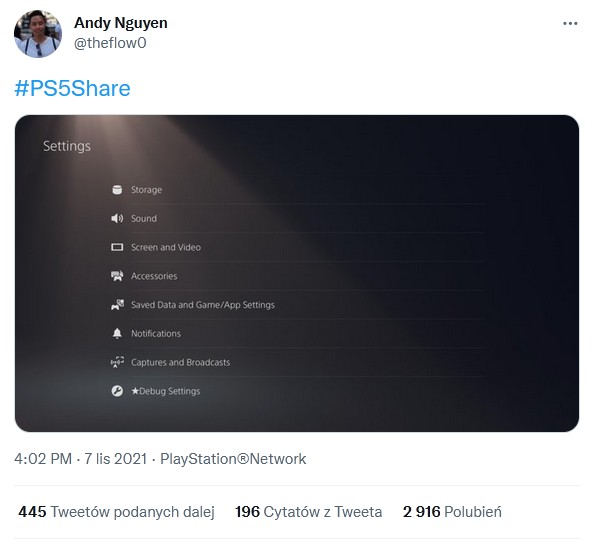 However, he has immediately cooled the enthusiasm of many users, indicating that he has no plans to reveal how he did it.

Theflow0 (privately Andy Nguyen) is a well-known persona in the console community, working as a security expert at Google's Swiss branch. He was one of the crackers who dismantled the security of PSP, PS Vita and PS4 consoles. He was also the creator of Adrenaline system software, the Trinity exploit for PS Vita and unofficial ports of Grand Theft Auto: Vice City and Grand Theft Auto: San Andreas for Sony's handheld. In short, a legend of the cracker console scene.

For several years theflow0 has been cooperating with Sony in a program to find and document security holes in PlayStation 4 and PlayStation 5 firmware in exchange for cash rewards. In the last 90 days alone, Sony has paid out $50,000 in rewards, and theflow0 himself has officially raked in a total of $20,000 so far. We can guess that this is a possible reason why details about the exploits found in the Japanese giant's consoles are not disclosed. Interestingly, similar cooperation programs are offered by Nintendo (here) and Microsoft (here), and the sums paid to crackers in these cases are also impressive.

Cyberpunk 2077 Ends Up in Museum of Failure

Horizon Forbidden West Will Have Diverse and Dangerous Machines