According to a leak, Avalanche Software studio's latest game is codenamed Jackdaw, but the full title will be Ravenbound: Tales of Avalt. The studio must have its hands full, as it is still working on its upcoming Xbox and PC editions of Contraband, as well as - according to other rumors - Just Cause 5.

Avalanche Studios' new game is said to be a fantasy roguelike

The existence of Ravenbound was announced on Twitter by leaker Shaun Weber, who described the gameplay premise and showed alleged screenshots from an early version of the game.

According to Weber Ravenbound is supposed to offer a third-person view and be a roguelike game with RPG elements, somewhat reminiscent of an open-world Dead Cells. The action is set in a medieval-inspired fantasy land called Avalt, where we take on the role of the "Vessel of the Raven" which is supposed to chase away invaders. 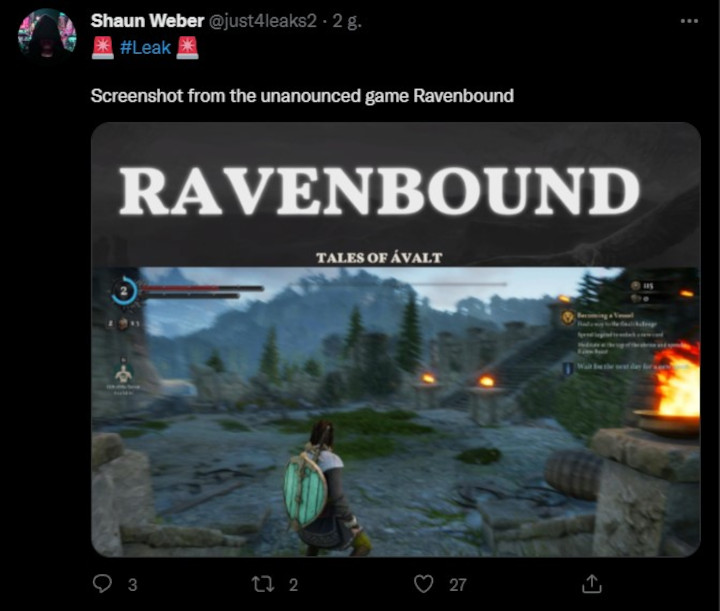 The main character has the ability to transform into a raven, which will enable us to see the world from a bird's eye view and mark enemies like in the recent Assassin's Creed games. After death we will start the game from the beginning and we will choose a new "Vessel", with different abilities and weapons. Each character will be assigned three cards - cultural traits, weapon training and a unique ability. Cards will also be received during levelup or purchased in the store, and then developed with the help of coins looted from chests in enemy camps.

In turn, according to reports from Tom Henderson Ravenbound is going to be a bit like a live-service game - new quests, enemies and rewards will appear in monthly seasons. The leaker is very positive about the game's condition and anticipates an official announcement in the near future.

Ravenbound is set to hit PC, Xbox consoles, and Android smartphones and tablets. The release is scheduled for 2024.

Terra Nil Demo Went From Zero to Hero on Steam

Terra Nil Demo Went From Zero to Hero on Steam

ARK: Fjordur - How to Teleport?