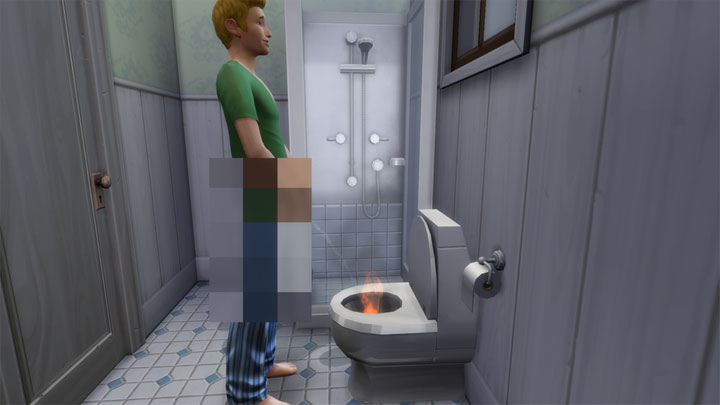 Effects of the new patch are... interesting. Source: madmacy421.

Yesterday's patch 1.63.133.1020 for the PC version of The Sims 4 was supposed to prepared the game for the upcoming Eco Lifestyle expansion and introduced a lot of awaited novelties, including ladders. Unfortunately, the update turned out to have many shortcomings. Some of them are just annoying bugs, but others bring very funny results.

First of all, for some reason some sims started to set fire to toilets while peeing. Fortunately, this does not cause any damage to the characters, but looks very unusual. The problem occurs surprisingly often and is most likely related to the introduction of firefighters.

That's the funniest bug, but not the only one. Other players report problems with the newly-introduced ladders, which the sims can climb in whole groups, which makes their bodies merge into a slightly gruesome mass of bodies. Another thing are advice displayed on the loading screens, including texts such as "ok" or "I don’t want free earbuds", which are probably a remnant of developer work that someone forgot to remove afterwards.

There are also more traditional disadvantages. The update has broken many mods and there are problems with loading some saved game states. In general, however, players seem to be satisfied with the patch, as it brings a lot of welcome novelties, and the community realizes that the bugs will be fixed soon.

The Sims 4: Eco Lifestyle will be released tomorrow, that is June 5. The expansion will debut simultaneously on PC and Xbox One and PlayStation 4.