To understand the confusion that has arisen around the vampire hunter known from Marvel comics, it is necessary to go back a few hours. That's when the news broke about Ubisoft allegedly working on a video game about the adventures of Blade. The source of this rumor was a post published by Rebs Gaming. The Twitter user came across photos of actors Edwin Gaffney and Alex Martin (below), in which the men take part in a motion capture recording session at the company's headquarters. 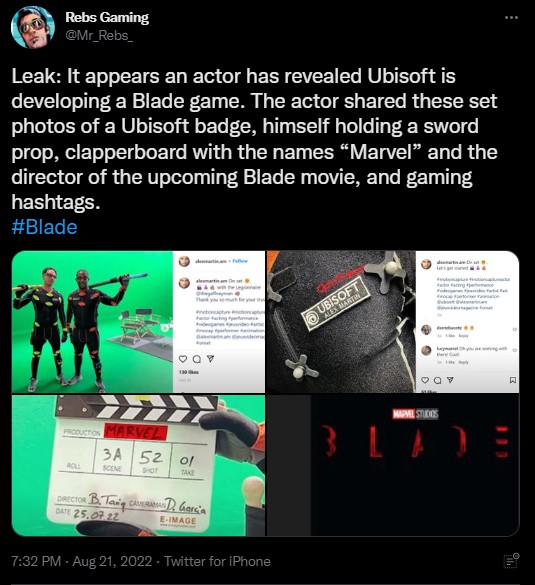 Seemingly nothing extraordinary, but observant fans have noticed a small clue indicating that Ubisoft may be working on a game licensed by the House of Ideas. Namely, it's about the movie clapperboard and the Marvel name on it, as well as the inscription "B. Tariq," which, according to the theory, was a nod to Bassam Tariq - the director of the new Blade.

At the time, Miller and Gaffney did not reveal what project exactly they were referring to, but confirmed that it was a video game. Apparently, the actors decided to mess with the fans for fun.

According to the latest information from Ubisoft itself, the company is not working on any game about the legendary vampire hunter, and is most likely only lending its motion capture studio to Marvel.

Recently, Marvel has been getting bolder and bolder in the world of video games, selling the rights to use licenses for its numerous superheroes. Therefore, it is hardly surprising that the gaming community was so quick to jump to the wrong conclusions.

Path of Exile (PoE) - Heist unlock order for your team

One Screenshot From Stardew Valley Dev Electrified the Community