The launch of Victoria 3 can be considered moderately successful - critics are mostly pleased (the average of their 31 ratings collected on Metacritic.com is 83/100), players a little less so (only 63% of more than 17 thousand reviews on Steam are positive). The community complains mainly about the weak warfare system and problems with diplomacy. Studio Paradox hears this criticism, as evidenced by the recently published entry of developer's diary.

In it, the game's director, Martin Anward, stated that he was nevertheless satisfied with the game's debut. At the same time, he admitted that now the team is facing as much work as before the release. First on the agenda will be improvements to the aforementioned two systems, as well as giving players better immersion into an alternate version of history.

A list of the most important changes for the near future is shown in the graphic below. 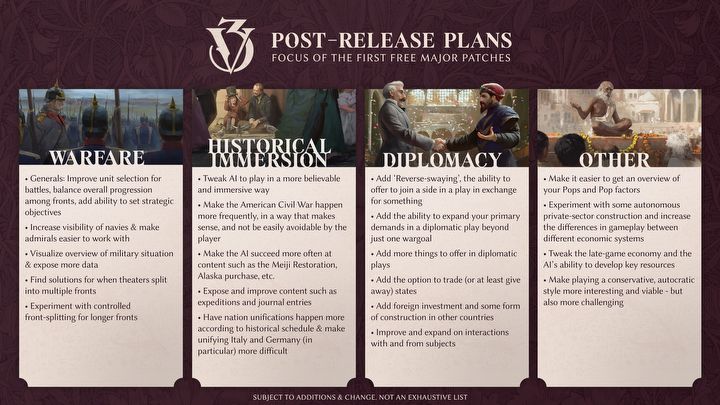 It is worth bearing in mind that the above changes do not exhaust the developers' plans for the third Victoria. However, the team realizes that these are particularly sensitive points. In a nutshell:

Importantly, these plans may change dynamically, as Paradox assures that it will listen to the community all the time. Nevertheless, it seems that the current intentions of the developers reflect the wishes of the fans, and therefore should not undergo major changes.

This certainly does not mean that the developer will forget about the numerous additions for which its games are famous. For the moment, however, the priority is patches and updates to the basic version of Victoria 3. It can be said that such a scenario was easy to predict - it is, in fact, an integral part of the development of whether 4X, or so-called grand strategy games. In other words - it remains to wait for changes with the hope that they will elevate the discussed title to a worthy successor of Victoria 2.

As a reminder, let me add that the premiere of the third game was held on October 25, and the game itself is available exclusively on PC.

Soulstone Survivors - Characters List; All Classes and How to Unlock