A few days ago we wrote about the fact that thousands of players are going to start playing World of Warcraft Classic from scratch, using a sparsely populated server. The Fresh Crusade initiative is supposed to be the community's response to the lack of "fresh" servers for the release of The Burning Crusade Classic.

The move was conceived because of the constantly growing population of bots, and thus - the unbalanced economy in the game world. The launch of the action was planned for March 5, hoping that at least a thousand players will join it. It turned out that the interest significantly exceeded the estimates. On Discord more than 10 thousand players registered for the action. The user responsible for the whole action, Caszhar, estimates that about 3 thousand players took part in The Fresh Crusade.

Due to the fact that no new instances were created, the chosen server Dragonfang [EU], quite quickly became clogged because of this. Hundreds of players instantly appeared in the starting locations, trying to start their adventure with WoW as they did back in 2004. Shortly after the start of the whole action, 20 guilds were formed, bringing the players together. People who described the whole situation spoke of incredible chaos, which slowly normalized with the passing of time, and users slowly went to populate the four corners of the world. The video below shows the whole situation well (watch from around 33:00).

Caszhar also provided the Eurogamer editorial team with some screenshots documenting the whole experience. Queues to NPCs, waiting for a questline enemy to appear. All of this in a cultural way. 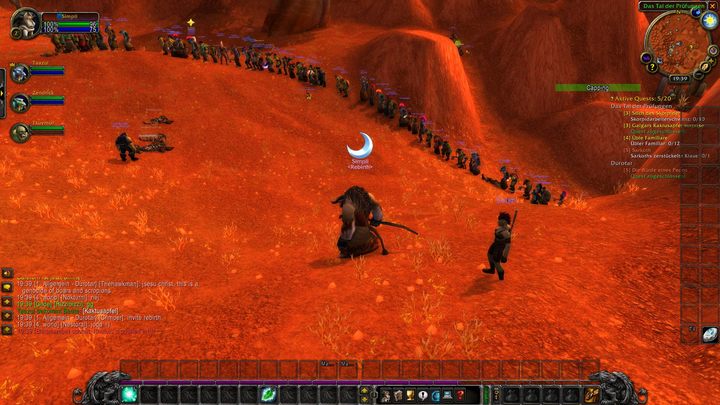 Queues to kill a storyline enemy that appears from time to time. Source: eurogamer.net

People who take part in The Fresh Crusade expect that eventually the bots will appear and start spoiling the economy and thus the fun of the game. Until Blizzard does something about it, every server will be affected sooner or later. The concern is also the potential toxic behavior of the players when the action gets enough recognition and new users start coming in. But the community benefits while it can and for now it's having a great time.