Respawn has recently faced a sizable wave of hate, culminating in a Twitter plea for civilized behavior. The developers are being harassed by part of the community, which should not happen at all.

The situation that has arisen is related to the condition of Apex Legends, which according to fans is not satisfactory. Developers are accused of procrastinating on fixing problems or avoiding the issue altogether. In the company's statement, we can read that there is a clear line separating constructive criticism from harassment. 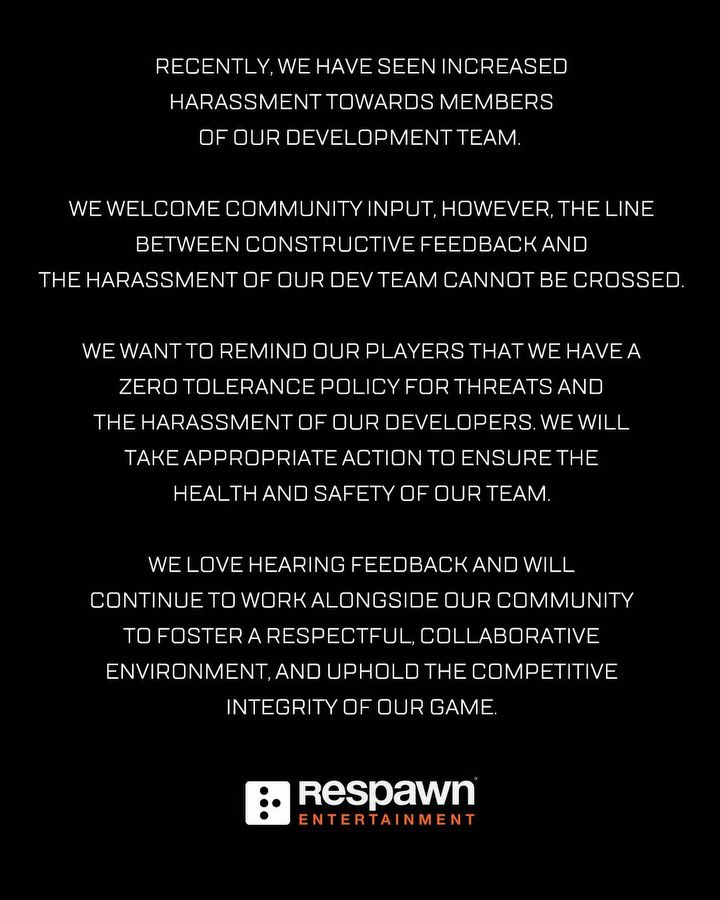 It is very possible that the announcement shown above has to do with two AMA (Ask Me Anything) sessions, which took place this week on the Apex Legends subreddit. Although at first glance there is no hostility from players, there were passive-aggressive questions about Pathfinder's skills, for example.

"Many seasons ago, Pathfinder was given a temporary passive while a real one was being brainstormed. At least, that's how it was presented to the community. Are y'all still brainstorming, or have you decided Pathfinder doesn't deserve a real passive?," via (GameSpot).

This issue also returned under the aforementioned tweet. The fact is, Apex apex do not want to justify the threats in any way, but this does not mean that Respawn is blameless.

"Your team definitely shouldn't be harassed over a game, but blatantly ignoring or giving vague answers to questions from your community WILL piss people off. Just admit you don't know how or don't want to make cross progression work or fix audio, etc. Honesty goes a long way," wrote CallMeCallous.

It is worth mentioning that the appeal against the harassment from Respawn Entertainment developers was supported by Bungie, which also faces threats and trolls.

All Slimes in Slime Rancher 2