Games with truly compelling stories are generally few and far between, so any title with an interesting, engaging story is generally fondly remembered for years. Our response to the plot is determined by many factors, and one of the most significant of these is undoubtedly the ending. Usually, it's a formulaic happy end, a touchy-feely walk into the sunset after defeating the ancient evil, just to learn after the end credits that the evil wasn't really defeated. We're thus always looking forward to an ending, hoping it will be shattering; a single moment to define the entire game.

The writers can in this way ensure that the game doesn't end after the credits. It can stay with us for weeks or months, making us ponder over the finale, discuss it with friends, looking for new explanations and interpretations. Oftentimes it causes anger, too. In the end, the type of feeling matters less; it's important that the game evokes any kind of response.

Over the years there have been many games with memorable finales  sometimes controversial, sometimes shocking, other times simply satisfying. Some completely surprised us, others forced us to analyse the entire story like a good film. Below, we have gathered ten such finales - powerful, unexpected, finales that we remember to this day.

It's probably obvious that the majority of a text titled like this one contains spoilers, spoilers and once again spoilers. We reveal the endings of ten games, write down exactly what happened in them and why. We draw attention to key points of the plot and recall the wonderful moments we spent with these games. However, it is exactly because of the spoilers why we focused only on older titles.

So you must be afraid of us revealing the secrets of The Last of Us: Part II or the finale of Call of Duty: Black Ops - Cold War (which would be a perfect addition to this list by the way). The vast majority of the endings in our list are spoilers comparable to revealing the iconic plot twist from The Empire Strikes Back and many of you will probably remember the quoted fragments. However, if you are planning to play something from our list, it is best to skip the description of that particular title, so as not to spoil the fun of learning its plot on your own.

"You'd better do something with that cough" - Silent Hill 2 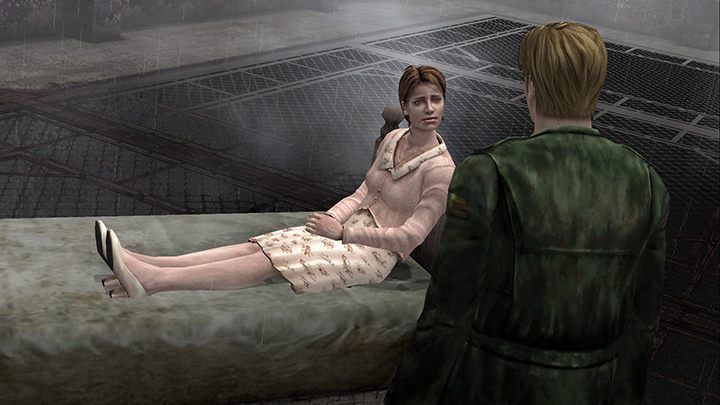 The second installment of Silent Hill is an unrivalled masterpiece for a large group of players. The plot is intriguing here from the very first seconds, as soon as we learn the reason why the main character, James Sunderland, came to the fog-draped town. Things get even more mysterious and interesting from that point, although also extremely gloomy - and remain so all the way to the grand finale, one of three endings that can be seen during the first playthrough.

No matter which ending we witness, it always turns out that before the events of the game James in fact killed his terminally ill wife Mary, and all the nightmares he experiences in Silent Hill are a form of punishment or materialized remorse coming from that act. The protagonist justifies himself partially with the desire to set Mary free from her suffering and partially with the fact that he himself couldn't bear the psychological burden of attending to his bed-ridden spouse. The genius of the game's story is that what James did and what he is punished for is hinted at at pretty much every step.

We keep encounter the mysterious Maria, who looks like Mary's twin sister, but is more aggressive, confident and attractive. She is most likely a reflection of all of James' dreams - what he could not have had when he was in a relationship with his dying wife. And that is why from time to time Maria dies before his eyes, often after a fruitless attempt to save her, and soon afterwards, she reappears alive and kicking. This is Mary's perverse revenge for what her husband did to her.

What shocks in Silent Hill 2 is not only the fact that we are generally the bad guy of this story, but also that , thanks to the clever efforts of the creators, we usually reach a depressing ending, after which we achieve no sense of victory or satisfaction. If we feel something, it is sadness and a temporary breakdown. Even in the seemingly promising finale titled "Maria", when James leaves Silent Hill with Maria, wonderfully resurrected after numerous deaths, to start a new life somewhere else - at the end the girl coughs in a very characteristic way, suggesting she suffers from the same disease Mary did. Most often, however, we see James committing suicide.