Rapture – a city hidden at the bottom of the sea

The cities in which their action was set, namely Rapture and Columbia, should be considered the real heroes of the BioShock series; their protagonists, in a way. They are completely different, and at the same time so unique that they're widely consider one of the most wonderful metropolises created in video games. If only for this reason, it's worth discussing them separately.

Let's start chronologically, that is, with the city of Rapture built on the bottom of the Atlantic Ocean in the years 1945–1951. Its exact location is unknown – we only know that it lies between Greenland and Iceland. The city was built in secret from world governments; which is why the buildings were made of aluminum, rather than steel, so that the enemies of Andrew Ryan, the founder of the metropolis, would think he was building aircrafts.

His dream, however, was completely different. It was a neon-lit utopia, gathering – at least in principle – the most talented, ambitious and independent individuals. Some of them we meet directly in the game, as Dr. JS Steinman and the musician Sander Cohen, as well as the geneticist Brigid Tenenbaum, who plays an extremely important role in the main plot of the first BioShock. 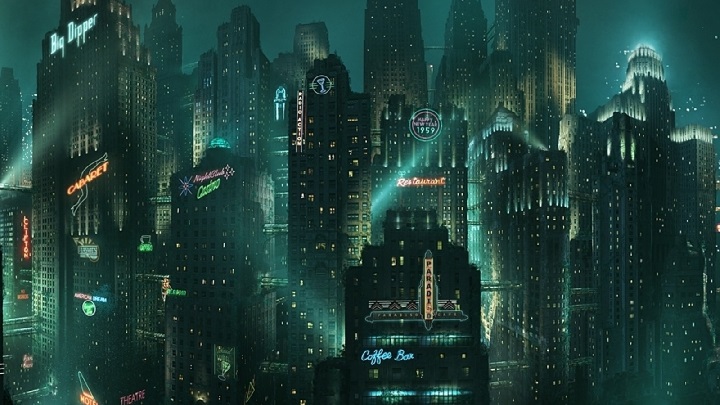 Rapture hides more than one secret.

For such individuals – striving for scientific discoveries and ensuring the city's self-sufficiency – Rapture could indeed be a utopia, full of elegant apartments and luxurious restaurants. We can experience some remnants and elements of this glamor in the game. They are visible in locations inhabited by the splicers, craving any fix of ADAM, which we explore to the rhythm of jazz music resounding from speakers. This oozes the vibe of the Rapture from before the New Year's Eve of 1958.

That's when the rebellion broke out. Andrew Ryan's vision turned out to be far from perfect. For example, he didn't consider the fact that the cheap workforce who erected the city, after completing the task, were unable to find a job capable of meeting their basic needs, isolated from the world, at the bottom of the ocean. These folks couldn't organize themselves, but someone did it for them – it was Frank Fontaine. His arrival marked the beginning of real decline of Rapture and, in a way, was the catalyst for the events of the first BioShock.