Last month, on August 21 to be exact, the first BioShock – and thus the entire series from Irrational Games – celebrated its fifteenth birthday. What's more, part four remains under the watchful eye of the Cloud Chamber team, and its presentation may be just around the corner. In other words, the time has come to look back and remember what we loved about this phenomenal series of games.

Is "love" not a tad too strong a word? I don't think so – both BioShock, BioShock 2 and BioShock Infinite scored very high scores (mostly nines and – less often – eights). All three are also still fondly remembered by the players. Why is it? Which elements of the series do fans remember best? What do we owe to these games?

Here's a sentimental, but not without sober reflection, journey into the past. We will mainly focus on the original installment of the series, but not exclusively. But first, be warned of...

...of spoilers. Well, it's impossible to discuss these games in depth without revealing important parts of their stories. So, if you haven't had the opportunity to play BioShock so far, I advise you to come back to reading this text after you have done so.

Masters of narration through environment

Let's start with the element of BioShock that remains an unmatched benchmark for all video games. That is, narration through environment. It's often said that an image expresses more than a thousand words. But how do you make sure this simple idea is successfully implemented in a game?

Ken Levine, lead director of BioShock and BioShock Infinite, once stated that:

[...] Where you focus on an area that you can really bring to life and you kind of eliminate the questions of "Well why can't I go over the bridge to New Jersey?" So, we were able to really make a place that felt believable and real, I think, even though in actuality, it was really quite limited. We just sorta dressed it with all these buildings outside that were all basically glorified fakes. It let the story drive what we needed to show rather than some kind of predetermined map [...]. 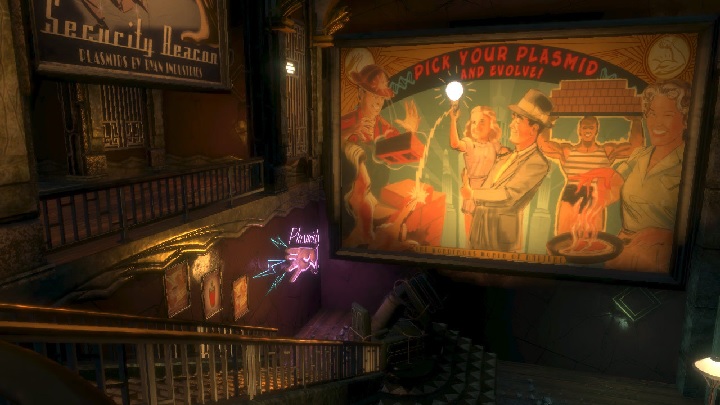 Everything is story. You just need to be able to read it.

The bridge Levine mentioned meant all kinds of artificial limitations of the space in video games (easiest example is invisible walls). BioShock has no such structures. No corridor in Rapture has been artificially closed – the player can explore all rooms in search of rare upgrades, supplies and audiologists telling the story of the underwater city before its fall.

It's not the perfect way of depicting a storyline, but it works well. Listening to the audiologs is completely optional, thanks to which it doesn't interfere with the fun for people who prefer to focus on the game, and at the same time allows players who do want to learn every nuance of the story to delve sufficiently deep into it. Equipped with the knowledge thus gained, they can find in Rapture the places referred to in these logs and give them an appropriate context.