The fate of little sisters was just one of many elements a player could decide. BioShock and BioShock 2 – unfortunately not Infinite – they belong to the genre of immersive sims, i.e. games in which the creators give the player a number of tools and systems without imposing the only appropriate method of using them. It's the player who determines – fully empathizing with the character and his situation – how he wants to solve the encountered problem, regardless of whether it's reaching an inaccessible place, unlocking doors or bypassing a guard.

Why am even mention this? Mainly because it was the first BioShock that re-popularized this convention. No wonder it happened – after all, the game was created by Irrational Games, the same team that had previously brought System Shock 2 (1999), a game which BioShock clearly harked back to, including in the title. Moreover, the founders of Irrational Games – Ken Levine, Jonathan Chey and Robert Fermier – previously worked at Looking Glass Studios, where they developed, i.a., the first two installments of the Thief series. So, the team had a lot of experience in the immersive sim genre and made good use of it. 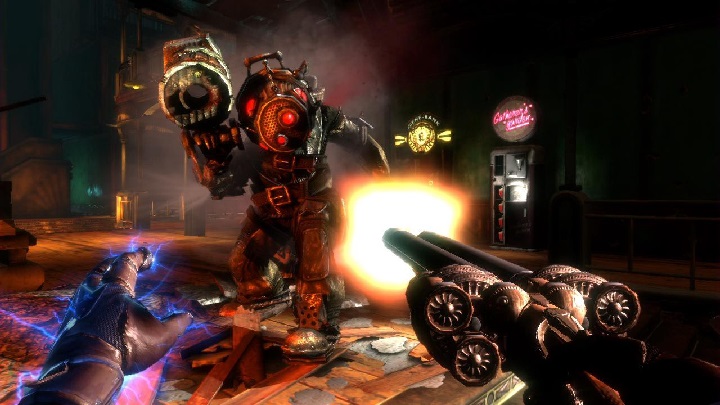 Grandpa System Shock would be proud.

Although I am delighted that this is how things turned out – the creators deserve praise for the courage and risk taken – System Shock 2 was both a brilliant game and... a financial flop. It's hard to blame the publisher (Electronic Arts) for not wanting to invest in part three at that time. It's also hard to blame other developers for choosing to create completely different productions in the meantime. Indeed, even Irrational Games, who undoubtedly had a lot of faith in this genre, waited a few years before tackling it again (note they also had to find another large publisher, Take-Two Interactive).

Fortunately, BioShock achieved financial success (possibly greater than Take-Two had assumed). This yielded two more installments of the series, and riding on the wave of its popularity, Arkane Studios created the first Dishonored, another excellent immersive sim, with which the studio entered the major leagues (it's also worth remembering that the previous game of this developer, released in 2006 – before BioShock – Dark Messiah of Might and Magic, was also inspired by this genre, though not as much as later productions).

Would Dishonored, Prey or Deathloop – as well as many other games that have come out in recent years – have been made if BioShock hadn't balzed the trail? Well, the story could go differently; especially since Arkane Studios helped Irrational Games create levels for BioShock. I think it's fair to say that even if the French studio had considered focusing on the immersive sim genre, the decision to actually go for it was made only after the success of Ken Levine and company.