Burial at Sea – a great expansion and return to roots

BioShock Infinite Burial at Sea is among my favorite releases of all time. It really is an excellent adventure. This didn't initially occur to me at the turn of 2013, when two episodes of this expansion were released. Mainly because in that moment, the days of large, full-fledged add-ons, previously even released separately on CDs, were already gone. These were already widely replaced by digital DLCs, usually offering little new content, often of controversial quality. Burial at Sea was an affair for about ten hours, but different – much like Hearts of Stone and Blood and Wine for The Witcher 3 or The White March for Pillars of Eternity.

This expansion is distinguished in three key areas – structure, gameplay and plot. The structure is quite unconventional. The action of BioShock Infinite is set in Columbia, floating in the sky, while Burial at Sea takes place in the underwater Rapture. It is therefore a real tribute to the long-time supporters of the cycle, especially because they got a chance to see this beautiful metropolis before the outbreak of the rebellion that turned this place into hell (though it is also far from the utopia it was supposed to be). Interestingly, in the first episode of the expansion, we play the role of Booker DeWitt, the protagonist known from the core game, and the gameplay itself doesn't differ much from what we already know, and is mainly based on shooting. 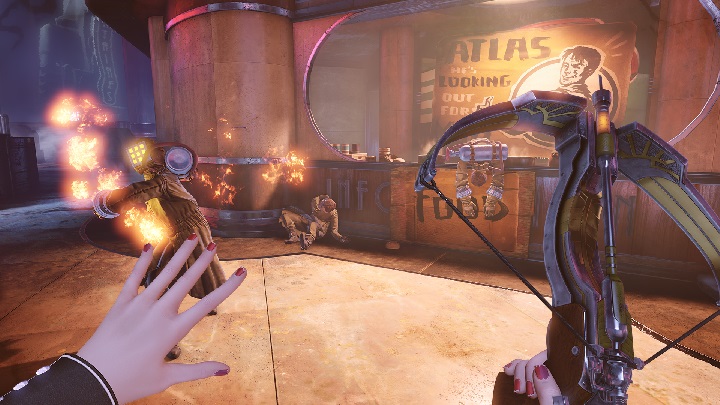 Playing as Elizabeth is a very nice change after several hours "in the skin of" Booker.

But little did we know – the second episode did something unexpected. The role of the protagonist is taken over by Elizabeth, who is far from being a killer the like of Booker. And to avoid any unnecessary dissonances on the part of players, the game enables a full-fledged stealth mode. This change didn't appeal to all fans of the series, but I found it thoroughly refreshing and accurate. I even had a slight hope that Irrational Games would try to create a standalone game based on some of the mechanics used in this expansion.

As we know, it didn't happen, and Burial at Sea – Episode Two was the last we've heard from this developer. But then it was quite a game – the story is a real masterpiece. And not only that – it also pretty neatly ties the threads of Infinite with those from the original. Why only "pretty neatly"? To some extent, it's apparent that the story was created on the span of many years – some of the things we learn about in the expansion aren't reflected in the first BioShock, although, given the chronology of events they should. However, this is but a scratch on the brilliant diamond, and I, as a fan of the series, couldn't wish for a better closure.