The record-fast circumnavigation of the world used to be 80 days, at least according to Jules Verne's book. Today, it can be done much faster – in 80 clicks or less, if we use the capabilities of Flight Simulator 2020 to do it. Today, we'll take you on an trip around the world, visiting the most iconic locations of our planet. But we won't just settle for a few places known from postcards.

We'll also visit locations familiar to all gamers around the world. Because, well, video games are often set in real-life places. We'll see what these locations look like created using different tech in a completely different kind of game. Of course, places intended for close-up sightseeing will usually look better, but I think we will also find some interesting surprises.

Let us also remember that all images come from the beta version of Flight Simulator 2020, which offers two types of terrain generation: procedural (based on flat photos) and three-dimensional (maps created using photogrammetry). The very quality of Bing satellite imagery can also vary greatly depending on a particular region.

Paying a small tribute to Verne's classics, our journey starts in London, from where we will head south, and then, as in the book, East, but already modifying Fileas Fogg's route significantly. We'll pay a visit to various friends from different games: Jacob, Eva, Bayek, Price and McMillan, C.J. and others. Buckle up and go!

Wait, but this game has no story! In a way, it does! Exploring the world will certainly be one of the main advantages of Flight Simulator 2020, so if someone wants to explore all these places themselves, you might consider seeing them beforehand a sort of a spoiler. 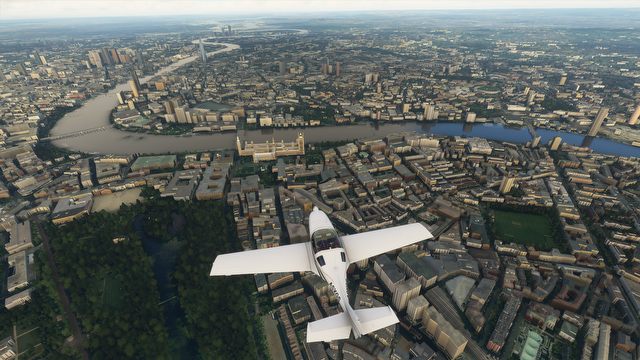 Many of Europe's famous metropolises are procedurally generated, albeit with a few handmade monuments. The British Parliament is one of the purpose-built buildings chosen by artificial intelligence algorithms, but its quality seems a little short of expectations. The quality is, expectedly, not even close to Assassin's Creed: Syndicate. In FS2020, we can admire the world from above, not from the height of a speeding carriage. A third-party company famous for creating expansions to sims has already announced plans to bring an entire set of London landmarks. Fortunately, Tower Bridge looks a little better now, as if another team worked on it.