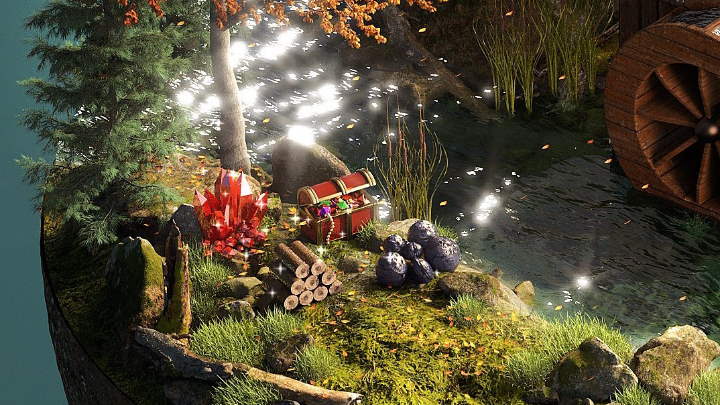 Without moving far away from LEGOs, let's move on to the various dioramas that sprung up like mushrooms and keep getting a lot of attention from the community. Blocks are often used to create them, but for the purposes of this compilation, I have decided to exclude these kind of creations, focusing instead on other forms of crafts.

For good measure, we should mention the Polish creator, Wit Olszewski, who designs moving dioramas in a graphics program. Wit's credits include dioramas from Diablo II and Heroes of Might & Magic III.

Of course, we couldn't miss The Witcher 3, which thanks to the Reddit user named kl0buk appears in our list with a diorama showing Geralt's duel with Eredin. The creation process was recorded on video, so we can see how the whole thing was created.

Staying with more realistic designs, it is worth recalling the beautiful mock-up inspired by the movie Alien.

There are also artists that experiment with materials. Luxembourg-based Wuppes creates charming paper dioramas. The designs (such as the world map from The Legend of Zelda: A Link to the Past) look lovely! Similarly, the mockup, made with plasticine to recreate the battlefield from StarCraft II. And it's hard not to mention the fantastic design of Liyue Harbor from Genshin Impact, which took over 1000 hours to recreate.

Examples can be multiplied endlessly. A diorama of GTA: Vice City? Here you go. Ghost of Tsushima? No problem. Street Fighter? There's plenty to choose from. And if you're a gamer on Apple's hardware, you'll be interested in Fantasian, a title masterfully put together by Hironobu Sakaguchi. The visuals of the production were inspired by dioramas and look amazing in motion. This is in no way a fan project, but I just had to mention it here.