Cyberpunk 2077 is not only filled with tons of gaming, movie and tv series references. The game also contains lots of quotations and purely literary inspirations, more or less subtle. Although we will not describe all of them, as it would probably take some additional few dozen pages, the end credits contain a list of all references to literary works of art. And these are not only the cyberpunk obviousnesses like Gibson or Dick, but also unique in the form of two Polish Nobel Prize winners  Wislawa Szymborska and Olga Tokarczuk. Heres the full list. 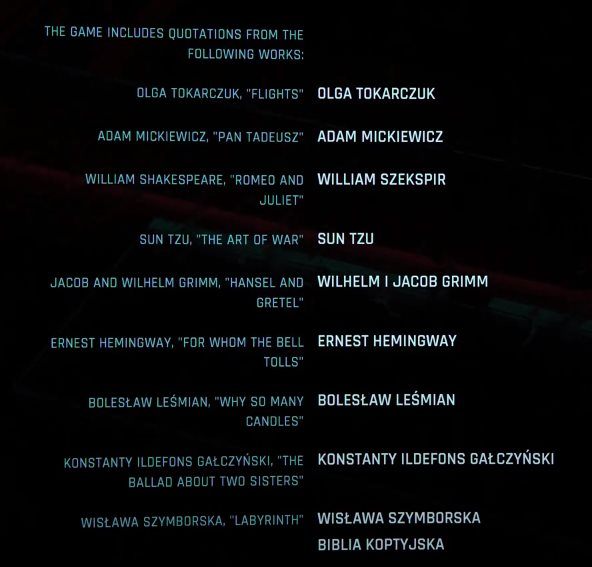 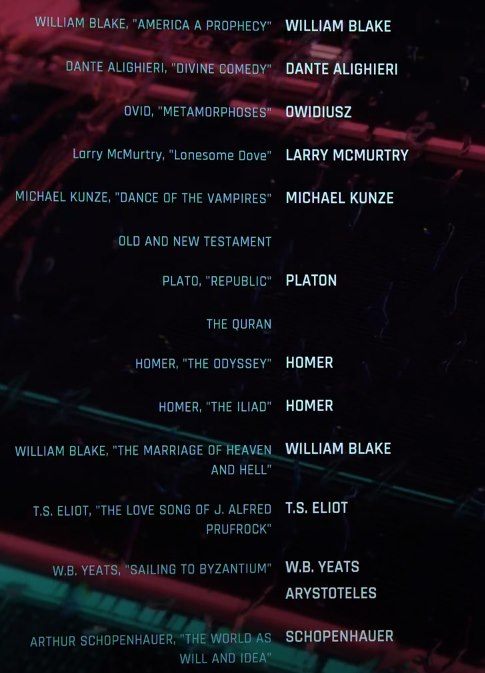 Aristotle spoke, for example, through T-Bug on the occasion of "The Heist" job, namely, when Jackie and V are driving a Delamain cab. The following words are then spoken: "The greatest offense is due to excessive desire, not necessity", which makes the characters slightly confused.

Ernest Hemingway  For Whom the Bell Tolls 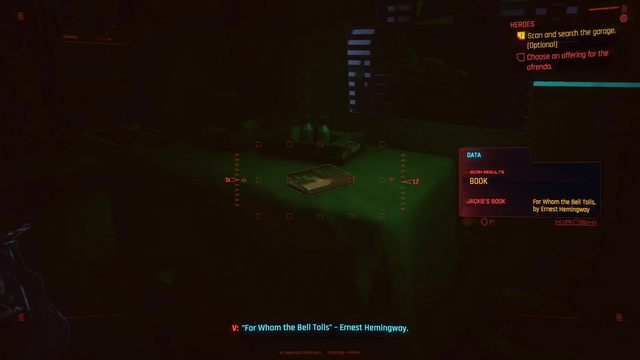 Jackie himself, however, was not as much of a tool as he claimed to be, and he happened to be familiar with literature. We find out about this during the "See you in Afterlife" job, during which we prepare for our friend's funeral. While searching through his garage, we find, among other things, Ernest Hemingway's book entitled For Whom the Bell Tolls, and Misty confirms that Jackie happened to read it. Interestingly, the final job in Cyberpunk 2077 has the same name as the mentioned book. Coincidence? I don't think so.

It is worth adding that "For whom the bell rings" is not the only job name in Cyberpunk 2077 that references a book. All you have to do is to quickly browse through your journal and I assure you that you will find other examples. These are, for example, "The Waste Land", a reference to the complicated English poem by Thomas S. Eliot, or "Cherchez la femme"  the detective theme was first used in Les Mohicans de Paris by Alexander Dumas.

Cyberpunk also winks at Russians. In many places on the walls, we can see the Cyrillic inscription proclaiming: "Coj zyw", which means: "Coj's alive". Who's Coj? Wiktor Coju, a tragically deceased Soviet rockstar, known for his activity in the band Kino (cinema). This is not the only reference to Russia. The fans there caught in the game quotations from their cult film Brother 2, as well as an allusion to the State Duma elections, in which, according to Russia-24 TV, 146% of voters voted in the Rostov region. In Cyberpunk 2077, this can be seen in the description of one of the Kaukaz cars which won the car of the year title garnering 101% of the popular vote.