A shard of ice instead of a heart

The studio, previously known primarily for the good, albeit not necessarily revolutionary Anomaly series, has plotted the path for This War of Mine. A path of games that are mature and tell about difficult things. The team's next project, which in draft form existed as a city builder entitled Industrial also went down this path  as the concept evolved, it was renamed to Frostpunk. Jakub Stokalski, the designer of this production, frankly confesses that after the success of their "civilian simulator" there was simply no point in making their next game just about fun. The new game of 11 Bit studios also had to offer the player some serious dilemmas.

"In This War of Mine, we tried to survive as a small group of people. In Frostpunk, we pose a different question: what people are capable of when it comes to survival not of individuals, but of an entire community," says Stokalski.

While in the case of This War of Mine the studio ruled out the possibility of a sequel, Frostpunk will definitely get one  although we're not sure when it will happen. Its first trailer was released in August, basically revealing that the action will still take place in the realities of an ice age, although our remnant of civilization will now be powered by oil, rather than coal.

Jakub Stokalski, the co-director of the project, said this: "Frostpunk 2 builds on the conflicts of the previous part: survival versus human values, life versus Arctic cold." However, it most importantly adds a new layer that's present in many aspects of the game  in politics, society, or technological advancement  it's the conflict between humans and their own nature.

Released in 2018, the title is as depressing as the studio's previous game. In Frostpunk, we're no longer directing a small group of civilians risking their lives just to get canned meat or bandages. Instead, it's a freezing mass, a crowd of humans, gathering around an energy generator and waiting for the player to show them a way to protect themselves  and potentially all of humanity  from the frost.

Initially, it's easy to introduce strict, yet common-sense rules: children should assist the community in safe jobs, workers should be willing to take extended shifts for the good of the community. But as the situation worsens, the Book of Laws in Frostpunk shows new possibilities. You can, for example mix sawdust into the food to increase the number of servings, even if it harms some of the residents. Dump the dead in mass graves in the snow to avoid wasting time and energy on burials. Leave the starving refugees out in the cold. Create militias to pacify strikes when workers start complaining about being overworked. 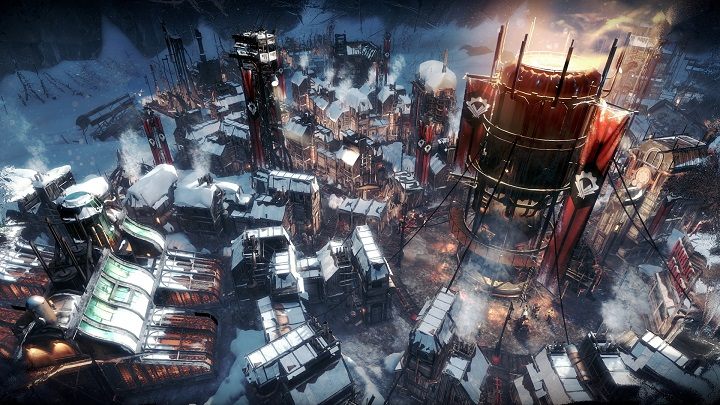 Hardly any player starts out in Frostpunk with the premise of aiming for a fascist dictatorship, but a frighteningly large number end up there.

"The basic concept that emerged from the production process was the analogy of the boiled frog: enough small, tenuous steps take us, as a society, to a very bad place," Jakub explains.

At no point do This War of Mine and Frostpunk force us to violate our own limits. It is possible to complete the game without resorting to murder or authoritarian laws, instead helping those in need, and strictly adhering to your values. But these games can turn the pressure up to the point where sending children into the mines or robbing an old man of his medications seems an acceptable solution. Until hope begins to run out in the ice-covered city, and it becomes clear that it will be quicker to get people to fully surrender to a fanatical belief in salvation than to build grassroots social solidarity in the frozen land.

A great example of a similar approach  in addition to the games discussed here  is Papers, Please, which puts the player in the role of a passport inspector at a border crossing and gives a set of simple rules based on which we make choices about who to let into our fictional homeland. Every right decision gives us some cash, and for every wrong one, our bosses deduct something from our salary. You have to be attentive and thorough, and everything should go well. 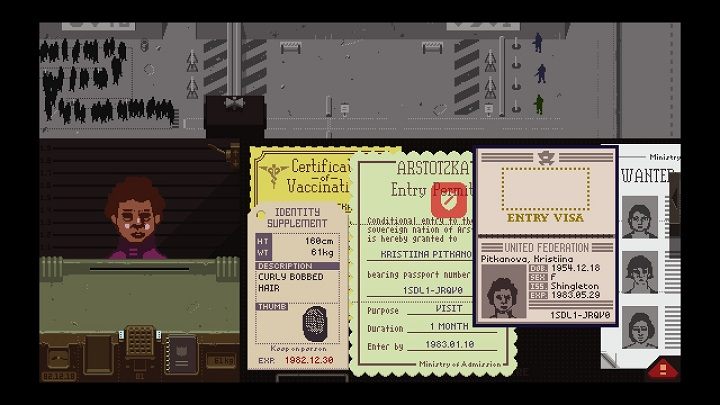 Authorities tend to introduce a plethora of additional documents overnight, which by no means makes taking the right decisions easier.

And this is where the pressures comes in. The pressure of time  because the shifts are not long, and in case of unforeseen circumstances, for example a terrorist attack at the border, can be significantly shortened. The pressure of money, because earnings are never enough to pay for the rent, food, and medicines for our sick son, and every night, we have to decide who will go to bed sick or hungry. The pressure of additional responsibilities, because the authorities of our dystopian homeland are fond of introducing increasingly complex regulations. Finally, and most importantly, the pressure of morality. Papers, Please continually makes us choose between what's morally right and what's in line with our orders. As a good border guard, the player will refuse a woman with a child who's missing one document just added to the required bundle overnight, but allow in a smuggler with seemingly legit papers. All this happens to the accompaniment of a ticking clock, with the knowledge that clinging to our principles will probably eventually kill someone dear to us.

The developers of 11 bit do not hide their fondness to Lucas Pope's game. Neither do they deny that they have confidently created games that, while not forcing you to compromise your own morality, while at the same time becoming significantly easier once you try to turn off the empathy  morality is the greatest difficulty. Stealing from the old folks in This War of Mine was easy. Accepting bribes and ignoring the requests of the poor people at the border in Papers, Please both make the games easier. In Frostpunk, going down the road of the most draconian, authoritarian laws took care of one of the main measures of public satisfaction  hope. 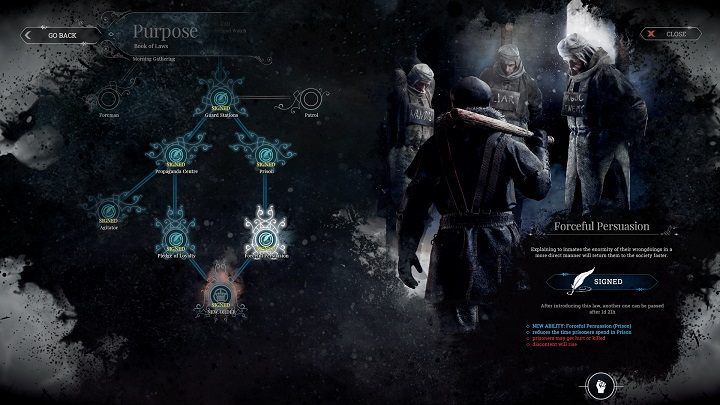 There's a long way from establishing neighborhood watch to conducting public executions, and Frostpunk leaves plenty of room to rationalize it.

And most interestingly, getting to the point where we become a murderer and thief, a heartless servant or a ruthless tyrant, is not a choice that is entirely consciously made during a single cut scene. In my case, all it took was a little pressure; the realization that I was running out of time, that my people were going to have a hard time, and found myself moving gleefully toward establishing a religious dictatorship in my ice-covered camp. At almost any point I could stop and say: this is where I draw my line. I never did it, and worse  I can still fully rationalize to myself the string of decisions I made that ultimately led to a fanatical military dictatorship.