In both Frostpunk and This War of Mine, the only thing harder than staying completely true to your values is being a monster in spite of yourself. It just doesn't give you any satisfaction. These games try to convince the player that each character, both those under their care and other NPCs, have their own emotions and experiences behind them. In Frostpunk, every citizen has a name, family information and a job; from time to time, you can even hear the voices of individuals commenting on your actions. In This War of Mine, the developers did their best to avoid clichés from other war games. Not everyone in the shelter managed by the player is a skilled soldier, almost no one is ready to kill without hesitation. There are some characters that are essentially useless, only devouring precious resources, demoralized, dissatisfied, and unable to part with their addictions. But each one comments on our actions, each writes their own story, each resides among us  and so it's hard not to have at least a little empathy for them. And even if we don't relate to them ourselves, their illness, mental state or depression will affect everyone in our group.

Maciej Sulecki and Jakub Stokalski both admitted that their games, Frostpunk in particular, are not perceived the same way in every cultural circle. For example, players in China did not fully understand why the game, after completing a scenario, summarizes their choices and asks: "Was it worth it?" In a country where, unlike the United States or Europe, collective attitudes prevail over those individualistic, some audiences apparently felt as if their decisions were unduly undermined. Which, of course, didn't lead to any changes in concept  ultimately, Frostpunk is just a certain artistic vision.

Nevertheless, Stokalski claims that this reaction made him think: "For me, it would be a very interesting experience to see this type of game, but created from the Chinese perspective."

In addition, both of these productions do not treat cruel actions as something particularly interesting or spectacular from gameplay perspective. For example, in Frostpunk you can, at some point, enact a law that allows cannibalism. It's a shocking endeavor, so there was a risk that  like all extremes  it would attract players looking to take on the role of the insanely vile city mayor. But the developers didn't design this as a watershed moment in gameplay. First of all, you have to be really terrible at providing food and having much of your population die of starvation. There's also no achievement for enacting a law legalizing cannibalism. You also won't get to see a gore cut scene. We will only hear voices of horror and disgust among citizens who are being forced into something horrible by our incompetence. The most inhumane acts are most of the time the tragic result of our ineffectiveness. 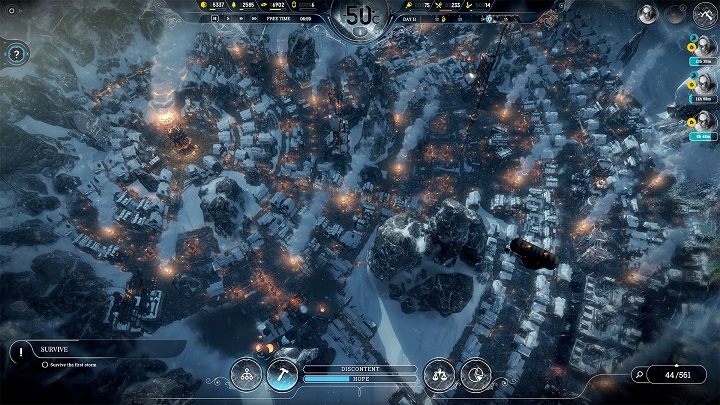 Before the troublemakers start roaming the city streets, the first worker loses his legs to frostbite, and the temperatures drop below negative 50 degrees, you might think that you won't have to make difficult decisions in Frostpunk.

Morality is not just an extra attachment to crafting or extensive combat. It's an integral part of the systems that constitute the whole experience. If you subtract personal dillemas from Papers, Please, you will get one of the dullest productions of the decade. Take away the ethical dilemmas from This War of Mine and Frostpunk and you're basically left with an undistinguished survival/city builder.

"For us, this has already become part of the identity: we try not to separate narrative from gameplay. In the end, inside the player's head, it's a unified experience," states Stokalski.

In effect, seven years after I first played This War of Mine, I still remember the stories of my first group. And while I haven't returned to Frostpunk in the last two years, I still know exactly how far I was able to go before I defeated the frozen wastelands. I'd like to see more games based on the same, creative philosophy ( Undying, which recently hit early access on Steam, looks promising). A philosophy stating that in my adventure, it doesn't take red dialogue options leading to jerk actions or achievement rewards for acts of cruelty to become an amoral beast.

Let me figure it all out myself.