Ag, the city! Our colleague Martin has recently written a Night City Appreciation piece, so we can only add we completely agree. Because speaking of the greatest advantages of Cyberpunk 2077, you have to mention the project and climate of this metropolis. I'm also a fan of big city bustle  I much prefer it than secluded nature, and the cyberpunk city turns out to be almost painfully realistic on many occasions. Ubiquitous grime, billboards, dark alleys, freaks  just like in the largest contemporary megacities. 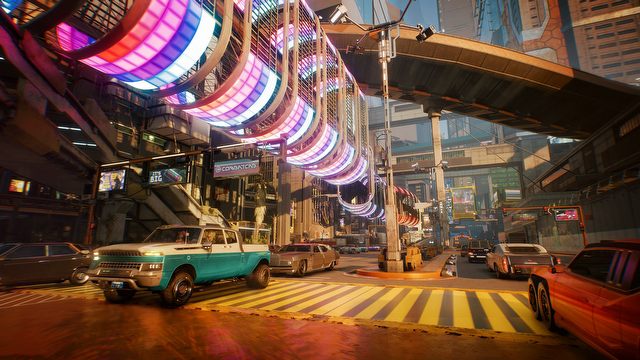 Night City, unlike any other city in games today, feels like a genuine megacity of the future.

The realism is pretty astounding given the outlandish nature of that world. Everything is exaggerated, but it also seems very real and visceral. I was very impressed by the verticality of the Night City  how much it soars, not just stretches. Lighting in such scenery has been perfectly utilized. Walking through some of the blocks, you get the impression that it's nighttime, but then you walk out to the street and realize it's actually early afternoon. Immersion is also strongly reinforced by first-person perspective, which fortunately doesn't seem as forced as in GTA V or RDR II. Night City looks great through the eyes of the hero and I'm not sure if switching to TPP wouldn't take away much of the game's atmosphere and realism.

Since writing the text about the city, I have played another "couple of hours" and I uphold my opinion. I play and play, and this world continues to surprise me. I still feel lost in it, I keep discovering something new. I recently went out of town and looked at Night City from afar at night. It's difficult to describe this feeling. It was like looking at a giant, beautiful, spectacular tumor of the Earth.