Jokes aside. In video games, we're almost always concerned with saving the world with heroic deeds, but perhaps oddly enough, we also like the games that allow us to stand "on the dark side of the force." To be bad to the bone, an agent of chaos that sows destruction. And that's not because there's something wrong with us, or because we have sadistic inclinations – quite the contrary. In games, we can do things that we wouldn't even think about in real life. To vent our destructive instincts without harming anyone. To become an evil genius without any consequences or remorse.

Fortunately or not, developers sometimes resort to a slightly different method – cons. Throughout the game, they deceive us that we're the good one, a character driven by pure motives. And then, just before the end, it turns out that we were actually deceived the whole time. Such a trick was used, for example, in games like Silent Hill 2, Spec Ops: The Line, Braid, Shadow of the Colossus, Heavy Rain or even The Last of Us: Part II.

There's also a third group of negative heroes – shown in a highly idealized, even romanticized version. We know that they're a thug, but it's difficult not to like them and not to root for them. Rockstar are masters in creating such anti-heroes. Tommy, CJ, Niko, John, Arthur, Michael – we rarely consider them as just murderers and thieves. And yet they are!

For now, however, let's leave the games that manipulate us or disguise the reality out of the equation. Let's see which games are adamant about the protagonist's evilness from the onset, allowing us to be the clear anti-hero of a given story. 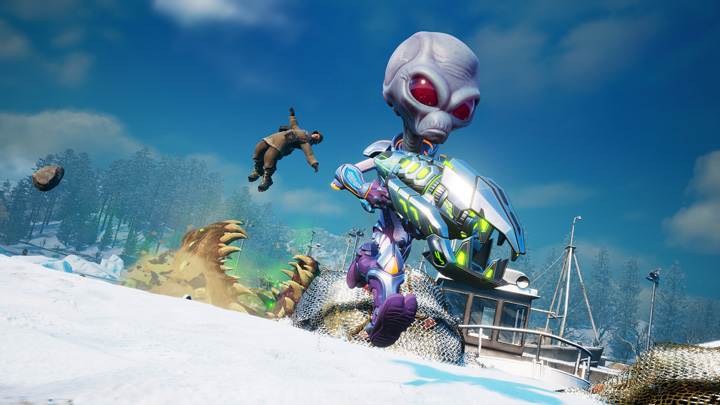 The title leaves no doubt that Destroy All Humans! is the meanest game in which we are on the unquestionably wrong side. We are supposed to destroy all of humanity, it's all in the title! But not as a frustrated man or a crazy politician, but as an alien from another planet on a mission of revenge. We engage in constant clashes with the US military and secret government organizations, but our plans are much more sophisticated. We are to prepare the extraction of human DNA to ensure the survival of our own race.

The whole thing is kept in cartoon, colorful style reminiscent of B-class sci-fi movies. The only surprise are constant remakes of this series. In 2020, we got a new version of the the original, and now we get Destroy All Humans! 2: Reprobed, another remake. And it would be enough to change the title to "Destroy all kitties (or dogs)" to infinitely raise the level of meanness of our hero, Crypto. Well, maybe we're not ready for that level of evil in gaming just yet.