Contrary to popular belief, it's not that easy to just start playing video games. Or, to put it another way, things that seem obvious to experienced players, can pose an insurmountable challenge to beginners. Computer games, like any other medium, have their own idiosyncrasies, developed over the years: interface, controls, unwritten rules that everyone knows, colors coding, not to mention specific genres governed by their own laws. For someone unfamiliar with the subject, it can be an insurmountable obstacle.

Therefore, when selecting the games for this article, we were guided by intuitive controls, good tutorials, player-friendly progression systems, length, and  last but not least  the level of fun. What do we mean by that? Well, the general impressions: music, gameplay, interesting story, and well-written dialogues. For most people, the easiest bridge to the gaming world will be references to movies and TV shows, because that's the medium they already know  and there's nothing wrong with that. TODAY Life Is Strange, tomorrow The Witcher 3, and the day after tomorrow  Dark Souls... All things have their time.

Without further ado: here's 9 video games for people who never played any. Of course, these are simply suggestions. If you have any ideas of your own, share them in the comments below. 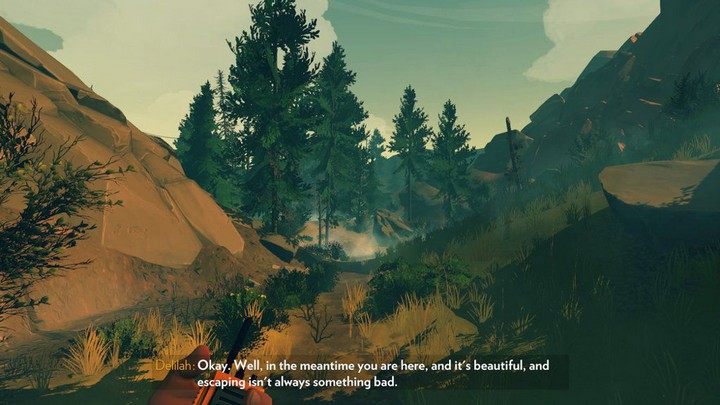 Firewatch can be described as the iconic walking simulator  a game in which your main activity is exploration on foot. In this particular case, it's exploring the scenic Shoshone National Forest in the state of Wyoming. You play Henry, who takes a job of a forest ranger living in a firewatch tower, in order to escape his life, which has taken some very unpleasant turns for him. There's not a single person within miles  the only company is Delilah, another firewatcher, and a rather talkative companion, with whom the player conversates through a radio, using a clever dialog system. Of course, it quickly turns out that the seemingly idyllic forests of Wyoming hold a dark secret that you must solve between spotting fires and chasing away kids having bonfires in the park.

The controls are highly intuitive, and the game leads the player through subsequent locations. You start with a map, a compass, a flashlight and, of course, a walkie-talkie. This basic set of tools is gradually expanded, allowing you to properly learn the new mechanics of each item you use.

Firewatch focuses on two issues  building a relationship with Delilah and trying to discover what mysterious events have taken place years ago in the park. The dialogs are very natural, well performed, and allow considerable freedom of choice for the player. The inventive dialog system allows for smooth and clear selection of your lines, making the conversations, which often focus on the protagonist's personal life, very authentic.

If you're looking for a quiet game with beautiful graphics and good dialogues  Firewatch is just the game for you.

If you're trying to get someone hooked on video games, starting with realistic ones, rather than fantastic, may be the better idea. Using a flashlight is much more intuitive than casting spells, after all.